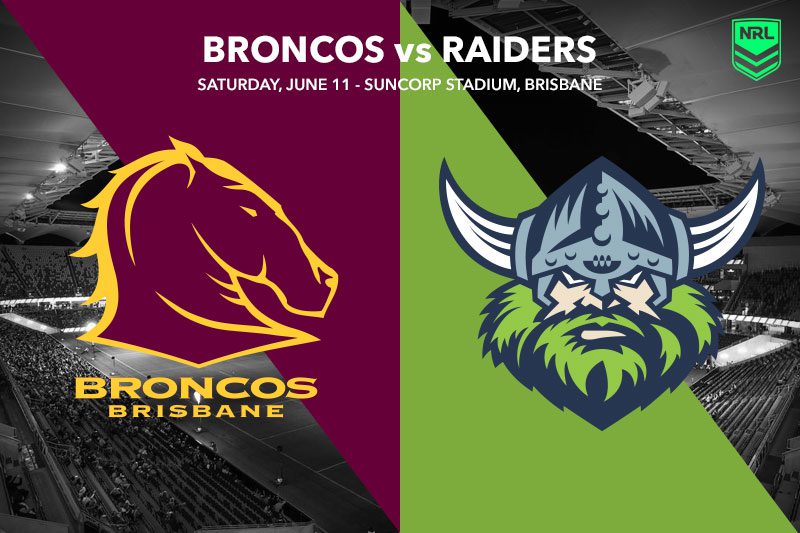 The Brisbane Broncos will take favouritism with online bookmaker into their clash against the Canberra Raiders at Suncorp Stadium on Saturday night.

Almost exactly a year on from their most recent clash, the Brisbane Broncos will attempt to reverse the result, with NRL bookmakers pricing them at $1.46 to win. The Raiders are priced at $2.75 with Neds.com.au.

The Broncos have won six on the trot, but have failed to beat the Roosters, who the Raiders disposed of last weekend, creating an interesting form line for this clash. The Raiders have now won four of their last five games and pose a massive threat to the Broncos.

Jack Wighton and Josh Papali’i will have to prove their fitness to play on Saturday for the Raiders, while Kotoni Staggs, Selwyn Cobbo, Payne Haas and Pat Carrigan will have to do the same for Brisbane.

Given their resurgence in recent weeks, can the Green Machine roll into Brisbane and pinch a win in the Sunshine State?

Of 36 clashes between these two clubs, the Broncos have been victorious on 20 occasions, with one draw between the two sides.

The Raiders have won the last three matches by an incredible 100 – 46, but all three games have been in the throws of cold Canberra winters.

The Broncos return to Brisbane will be key to their chances on Saturday, including the return of Adam Reynolds at halfback. Should the Broncos go on to win this, it will only be a short margin, making the 1-12 point win a safe bet at $2.75, which is available at Australian betting sites.

Should the Broncos right edge of Staggs and Cobbo fail to back up from State of Origin on Wednesday night, the left edge attack of Brisbane will be well and truly on display. Corey Oates and Herbie Farnworth are not slouches and have been in a rich vein of form this season. Look for both players to cross the strip at any time during the match paying $1.83 and $3.05 respectively.

The attacks for both sides have been clicking in recent weeks as they’ve piled points onto the likes of the Sea Eagles, Sharks and Rabbitohs. Saturday night will be the typical fast, dry, scoring-friendly Suncorp Stadium we have come to know. That makes over 40.5 a great bet in the total points market.

The halfback match-up of this match will be one for Rugby League purists. The kicking and game management will border on clinical, as they work to create time and space for wide running forwards and outside backs to attack. As far as kicking games go, both will be working to limit the impact of the opposing team’s back five, as well as kicking their side out of trouble should they find themselves there. Adam Reynold’s move to Brisbane has made him the focal point of the team’s success, and Jamal Fogarty has a large gap to bridge if he’s to lead this Raiders side to a win Saturday.