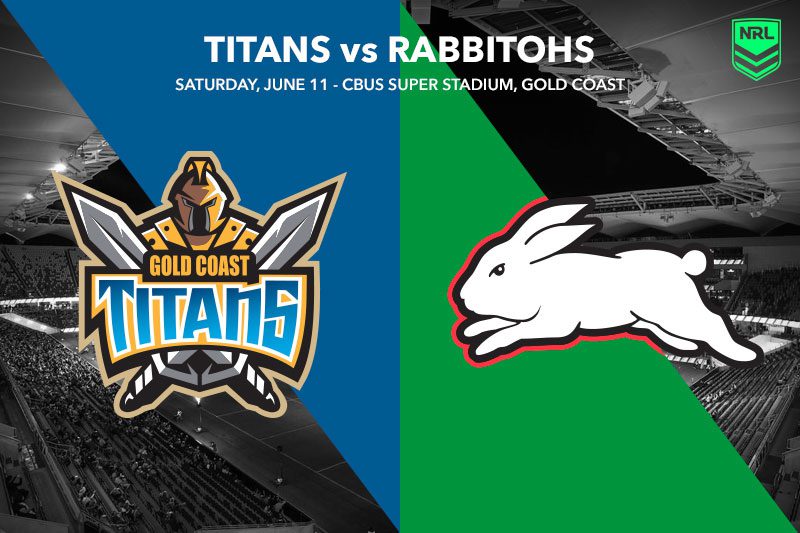 Super Saturday kicks off on the Gold Coast when the struggling Titans host the South Sydney Rabbitohs. The Titans have suffered a major injury blow with fullback Jayden Campbell succumbing to a hamstring injury, pushing AJ Brimson to fullback and bringing Paul turner into starting five-eighth.

The Titans may also be without captain Tino Fa’asuamaleaui following Queensland’s win on Wednesday, while the Rabbitohs could be without their captain Cameron Murray and hooker Damien Cook off the back of his NSW State of Origin appearance. With two sides potentially ravaged by injury and rested rep players, the on top selection is very clear.

In 20 matches head-to-head, Souths have won on 14 occasions, including their last two by a total of 76-36. Almost half of their last 10 matches have been won by Souths by a margin of 13 or more. Add into the equation the Titans horror run of form, and their apparent mental weakness when falling behind on the scoreboard, Souths are stronger favourites than odds suggest. Look for the trend of the Titans crumbling to continue as Souths will go on to win by 13+ points, paying $2.60 with BetOnline.

Alex Johnston scored an incredible hat-trick last week against the Wests Tigers, making him the all-time greatest tryscorer for one of the oldest and most famous clubs in the NRL. Souths’ attacking left-hand side is still one of the best in the competition, where Cody Walker is often pairing up with Johnston. Look for this trend to continue and Johnson to score his second hat-trick in two weeks, paying $12.

Campbell Graham is another outside back who should be thrust into the spotlight as a possible Origin call up awaits following NSW’s loss on Wednesday. When Graham isn’t breaking tackles and defensive lines, he’s setting up tries. Look for Graham to get over the white stripe at any time in the match, paying $2.55, in the hope of securing an Origin jersey for Game II.

Cbus Super Stadium is one of the best scoring grounds in the NRL when it’s dry, which is the exact weather predictions for Saturday. The Titans are struggling to get wins in the NRL and score many points, but Souths are more than capable of scoring 40 at the drop of a hat. This match will go over the 44.5 points total.

These two halfbacks are touted as some of the brightest young talents in the NRL and will have the stage set to put their skills on display this Saturday. Toby Sexton has forced the most goal-line dropouts of any half in the NRL, which is remarkable given how poorly the Titans have been travelling. On the other side, Lachlan Ilias is growing every game as a halfback and getting his side to points on the park that allow Cody Walker to create tryscoring opportunities. Andrew Johns lives by the saying, “the result of the game rests on the halfback’s shoulders”. Good, bad, or ugly, the result of this match will rest firmly on one of these men’s shoulders.