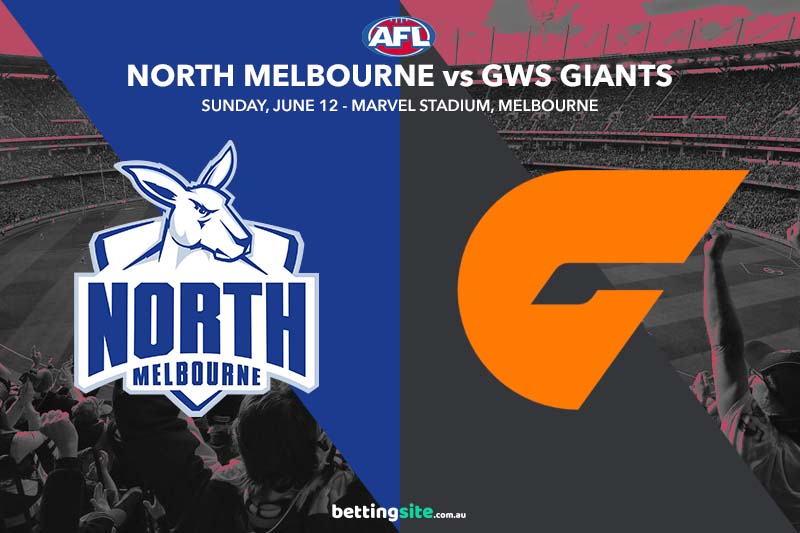 Can the North Melbourne Kangaroos register their second win of the 2022 AFL season this Sunday, or will the fresh GWS Giants be too strong at Marvel Stadium coming off their bye?

As the 2022 season progresses week by week, the North Melbourne Kangaroos appear to be more and more vulnerable, but there is some hope for the bottom feeders this weekend.

The GWS Giants are in the process of finding a new senior coach upon the departure of Leon Cameron, which could have an affect on the playing group heading into this somewhat dangerous contest.

Normally we would lock in the Giants to get the job done when starting as clear favourites with the top betting sites, but they have been quite inconsistent this season and could struggle against a fired-up Roos outfit.

The last clash between these sides finished at a standstill, as the Kangaroos held on to secure a draw down in Tasmania in a very unpredictable outcome.

David Noble’s men actually led at quarter time last weekend before going down by 62 points, as they simply did not have the legs to keep up with the Suns.

Mark McVeigh will have every intention of winning this match as caretaker coach of the Giants, as each win he records could lead to his appointment as a full-time head coach.

Josh Kelly and Jy Simpkin are the two best ball-winners for each team heading into this contest, yet they get the job done in a contrasting style each week. Kelly is a beautiful kick on both sides of his body, which is why his teammates target him on the outside and allow him to run rampant.

Jy Simpkin likes to put his head over the footy and rip it out of contested situations, often resulting in him finishing a match with plenty of touches at a low efficiency. It does not matter how well you use the footy when it comes to disposal betting, meaning Simpkin is just as valuable an option as Kelly. Both players will rack up heaps of touches this week, making them very handy options for same-game multis.

GWS Giants 1-39
There are no genuine holes in the Giants’ list, yet they do not seem to be playing their best footy each week. The Roos only have a couple more matches this season which they could pinch an upset, and this is one of them. Although the Giants have appeared vulnerable throughout the season, we still think they have enough firepower to keep the Roos at bay and secure an important road victory.

Jesse Hogan 3+ goals
This could be the contest Jesse Hogan needs to get back to his best in front of the big sticks, despite already enjoying a decent season. With Harrison Himmelberg spending more time behind the ball in defence, Hogan will have more room to apply his trade up forward. Hogan has kicked multiple goals in five of his eight matches this season, which includes all three GWS victories.

Jesse Hogan has been kicking well in each of the Giants’ wins this season, and we expect that to continue for another week. Josh Kelly is near-unstoppable in the guts and should outshine the entire Kangaroos midfield this Sunday.