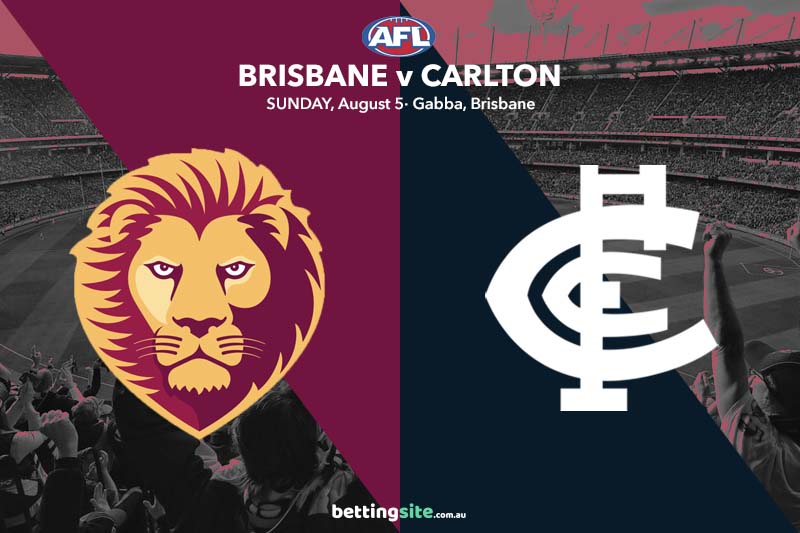 Can the injury-hit Carlton crawl off the canvas when they travel to the Gabba for their showdown against Brisbane on Sunday afternoon.

The Blues have lost several key players ahead of the encounter and have been installed as rank outsiders at $3.15, with the Lions as short as $1.37 with Australian online bookmakers.

The Lions are coming off a heart-breaking loss to the Tigers, after skipping out to an early lead in round 20. Brisbane played with ruthless efficiency in the opening half, using the corridor to hit target after target and setting up their forwards to share the goal kicking spoils.

And then it all went wrong. Richmond got on a roll, the Lions dropped off, and the score line was reversed.

Carlton produced one of their more disappointing efforts in round 20 versus the Crows. The Blues spent most of the game camped in their defensive arc, unable to escape the Adelaide zone. There was little flair to their attack, and they turned the ball over repeatedly.

The Blues are in danger of bottoming out here. Another loss on the road will blunt their September charge and rob them of crucial confidence. It’s worth noting that the Blues have a poor away record this year, winning just two games on the road.

Brandon Starcevich, Daniel Rich, Jaxon Prior and Kai Lohmann have been brought into the squad for the Lions, with just Nakia Cockatoo a confirmed out.

The Blues will make at least three changes with Lachie Plowman (Omitted), Matthew Kennedy (Injured) and Nic Newman (Injured) all going out of the line-up. They have included Brodie Kemp, Caleb Marchbank, Jack Martin, Jack Newnes, Lachie Fogarty and Paddy Dow, with the squad to be finalised on Saturday.

Brisbane key forward Joe Daniher started brightly in round 20, booting three early goals. But then like his teammates, dropped off and the lanky left-footer failed to trouble the scorer for the remainder of the match. Daniher has had a solid year, averaging 2.3 goals per game at 50% accuracy, but will need to be more consistent in his efforts and look to impact the play when the goals are not flowing.

Carlton key forward Charlie Curnow leads the Coleman Medal race and looks unlikely to be passed at this point. Curnow has averaged an impressive 3.1 goals per game at 59% accuracy this season, and his role in Carlton’s resurgence cannot be highlighted enough. The Blues need one final push from the big guy and will be hoping he can kick a bundle in this crucial contest.

The Lions go in as backable favourites here, and punters who follow home ground advantage might be inclined to step up and take the short odds. Brisbane have won 17 out of their last 19 at the Gabba. One of the losses coming when they had key personnel out against the Bombers in round 17.

The line is a manageable 17.5 points in what is expected to be a high scoring contest. Barring a significant form reversal, Brisbane look set to cover that margin spread. It’s very hard to tip against the Lions, and as much as we love the Carlton revival story, Brisbane -17.5 points is our best bet tip.

For those who like to play the exotics, we will be linking Brisbane -17.5, into Charlie Cameron 2+ goals, into Joe Daniher 2+ goals. This relatively safe combo will return $3.79 courtesy of Ladbrokes.