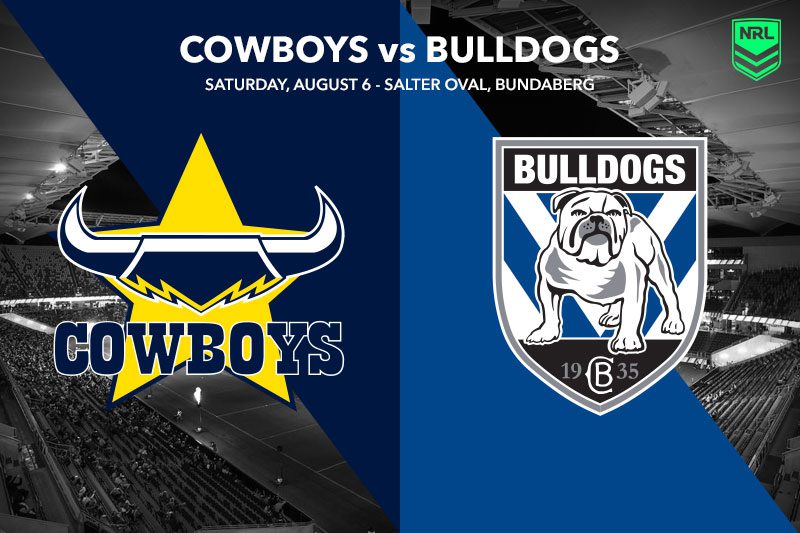 Sunday afternoon football travels to Bundaberg for round 21 as the North Queensland Cowboys host the high-flying Canterbury Bulldogs at Salter Oval.

Recent injuries to the Penrith Panthers have left the door slightly open for the Cowboys to string wins together and steal the NRL minor premiership, having almost won the wooden spoon in 2021.

The winners of the wooden spoon last year were the Bulldogs, but they’ve come a long way to be only three places away from the top eight. Will the Bulldogs stand in the way of the Cowboys becoming minor premiers?

Flash back to round one of the 2022 NRL season and these two clubs spent 80 minutes of football scrapping it out to conjure only 10 points for the whole match. While the outlook for the Bulldogs wasn’t overly bright, the same could have been said for the Cowboys, but they have made an incredible run since that day.

The Bulldogs have improved too since the change of head coach, arguably playing top eight football themselves. The Bulldogs have the luxury of naming an unchanged line up from the side that beat the Knights in Newcastle, while the Cowboys are replacing Kyle Feldt with Hamiso Tabuai-Fidow, due to injury.

In 37 clashes between these two clubs, the Bulldogs have won on 20 occasions, but seven of the last 10 matches have fallen the way of the Cowboys. The Cowboys this season have also prided their performances on defence, being the second-best defensive side in the NRL.

While the Bulldogs may lack the class and attacking ability to beat the Cowboys, they’re expected to make a bold showing with a real ‘Dogs of war’ mentality. With that in mind, the Bulldogs are a great value play to cover the +11.5 point line at $1.90 and make this a close and intriguing encounter.

Valentine Holmes is one player who has been back to his destructive best for the Cowboys season, along with many others. The work of Holmes has seen him score seven tries, but more importantly, Murray Taulagi outside of him has scored 11 of his own. Holmes and Taulagi will be attacking the inexperienced pair in Jacob Kiraz and Braidon Burns, who are far from the calibre of representative outside backs that Holmes and Taulagi are. Look for Holmes and Taulagi to both score at any time during the match at $2.35 and $1.72 respectively, with Ladbrokes betting.

Since Mick Potter took over the Bulldogs, they have been ranked sixth in total points, scoring over 25 points per game on average. What’s incredible about the Bulldogs, is that outside of Josh Addo-Carr, there’s no certainty on exactly where those points will come from. Should the points continue, not only will Addo-Carr find his way into the in goal area at a price of $2.25 but this match should go well over the 44.5 total points margin set for the game at $1.87.

The battle between these two fullbacks will be fascinating to watch as they’re almost carbon copies of each other. Both have incredibly running, passing and short kicking games that make them a nightmare to profile in scouting reports. When lining up on the other defensively, both players will be on high alert for their opposite number, while the attacking player will be watching to see his defender out of position to attack. Which ever forward pack for these two sides lays the foundation for the backs to create plays with time in space will dictate which fullback has a bigger impact on the game to lead their team to a win.