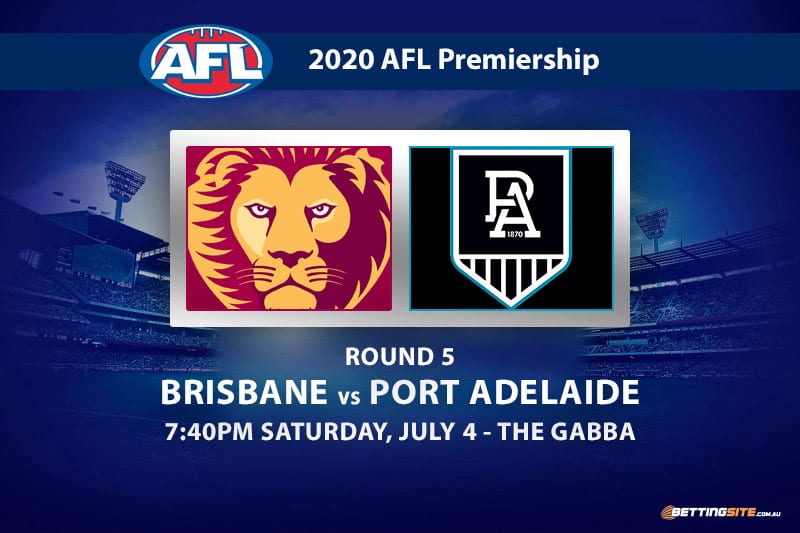 You won’t find a better game in round five than this clash between the Brisbane Lions and Port Adelaide Power at the Gabba on Saturday night.

While both clubs are sitting pretty in the top four, they have both beaten the same three sides: Adelaide, Fremantle and West Coast.

Some will say they haven’t proven anything by beating up the bottom teams, but from watching Port and Brisbane, it is clear where their strengths lie.

The Power have an explosive forward line that marks the ball well and converts a high percentage of scoring chances, while the Lions are elite in the midfield and hold up well in defence.

Chris Fagan’s men could claim top spot with a monster win over the Ken Hinkley’s Power, who are aiming to extend their winning streak to five games.

Not much separates these teams at this point in time, but we will know by Saturday night who the real 2020 premiership contender is.

We wanted to include Jarrod Berry in our Brisbane preview last week and decided not to. He went on to have 23 touches, so there was many to be made there. We see Berry having a similar impact against the Power due to his strength and running capacity, matching him up nicely with the likes of Travis Boak.

This is more than just a regular game for Tom Rockliff, who returns to the ground where he played nine season for the Lions. With his intimate knowledge of the venue, Rockliff should build on a solid start to 2020 and put up his best numbers for the season to date.

With Charlie Cameron stealing the spotlight every week, the rest of the Brisbane Lions forwards are going under the radar. Daniel McStay has kicked five goals this season and could find a few opportunities on Saturday night if the Power defence doesn’t give him the respect he deserves. McStay isn’t the best kick at goal, but he has a great tank and marks the ball well.

Perhaps the most pleasing part of Port Adelaide’s winning streak is the form of Charlie Dixon, who is coming off a six-goal haul against the Eagles. That’s a big bag in the shortened format, but he could have had eight if he’d kicked straight. Dixon looks sharper than he has in years and will hit the scoreboard early if he gets the service.

Scoring has come easily for both the Lions and the Power this season, and we suspect they won’t take a backwards step this Saturday night. The Power have not conceded more than 41 points in a match this season, but the Lions are averaging just under 80 points per game since the competition resumed. Both defences will be put to the test.

The stands may be all but empty, but the home-ground advantage could get Brisbane over the line in this one. The Power have hubbed on the Gold Coast, where they traditionally play well, but the Gabba has a different shape and feel to Metricon Stadium. It might not seem like much, but it could give the Lions the edge they need to deal Port its first loss of 2020.