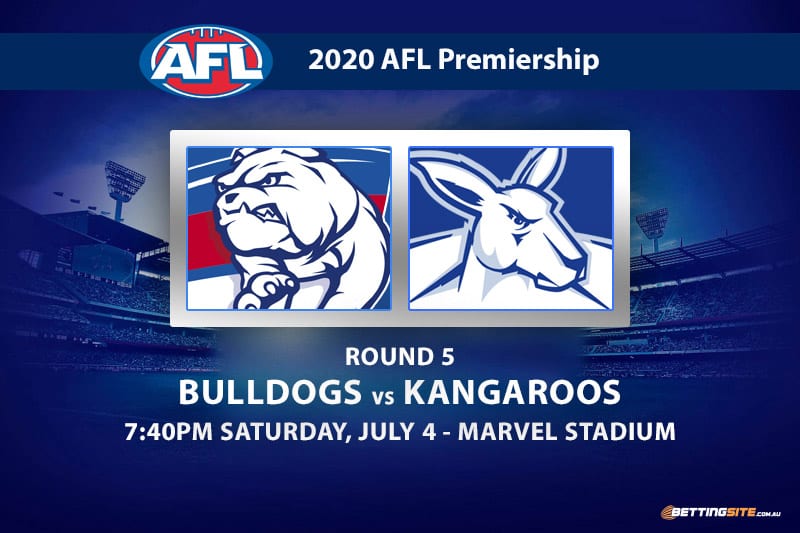 Marvel Stadium will become a battleground this Saturday night when the Western Bulldogs host the North Melbourne Kangaroos in round five of the 2020 AFL Premiership.

Both teams are sitting on the outskirts of the top eight, with each side confident they can be in the finals by the end of the 17-game season.

After starting the season on the wrong foot, Luke Beveridge and the Dogs have got back on track with consecutive wins over the GWS Giants and Sydney Swans.

Rhyce Shaw has endured the opposite effect, as the Roos started the campaign with wins over St Kilda and GWS before going down to the Swans and Hawks in the last fortnight.

Both sides have big outs this week, as Dogs forward Aaron Naughton is sidelined with an ankle injury and Roos skipper Jack Ziebell misses with a hamstring issue.

It’s a perfect weekend to utilise the roof at Marvel Stadium, which will keep the field in good condition and give the players every chance to showcase their skills.

Marcus Bontempelli was inspirational in last week’s over the Swans, as his class and courage shone through in several key moments. Although he only had 19 touches and hasn’t eclipsed 25 yet this season, we think the Bulldogs skipper can rack ’em up this week. The football will be hard to win against the tough Roos, making Bontempelli’s strength in the contest all the more valuable.

Most players’ numbers have dropped this year due to the shortened game time, but Jy Simpkin has gone the other way and might be the most improved player in the competition. His disposal average has lifted from 18 per game in 2019 to almost 25 in 2020. We predicted this surge early in the season, and there is no reason to think Simpkin will take his foot off the gas this weekend.

Josh Bruce has struggled to make an impact in his first few games with the Doggies, but the injury to Aaron Naughton might trigger a change of fortunes for the former Saint. Bruce has done most of his best work as the prime target up front, and we think he owns the forward 50 for the Dogs and kicks multiple goals on Saturday night.

There is very little hype around Curtis Taylor, but the young forward is developing nicely in his second year at North Melbourne. The rangy target is marking the ball well and knows where the goals are, making him a good choice as an anytime goalscorer. With Ben Brown struggling, Taylor needs to keep presenting and take his chances.

Marvel Stadium is the best scoring stadium by average in 2020, as it is the only ground in Australia that consistently sees over 110 total points per game. The Bulldogs and North Melbourne are two teams that know the ground well and boast an array of goalscoring avenues, so we should see plenty of action at both ends.

A slim win for the Bulldogs seems about right for this match. The Roos are facing a third straight loss despite showing some good signs since the restart, while we cannot deny the form the Doggies have built in the last fortnight. Trust the Sons of the West to get over the line within the 20-point margin.