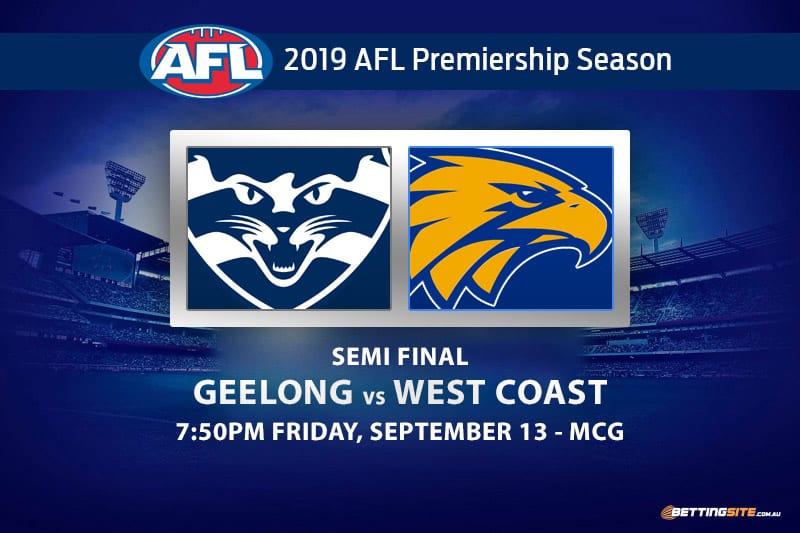 The Geelong Cats and West Coast Eagles will take to the MCG this Friday night for a cut-throat AFL finals clash.

From here on out there are no more second chances and only the winners will move on to the next hurdle, which in this case is a preliminary final against the Richmond Tigers.

Geelong coach Chris Scott has received his fair share of criticism this week after pulling out Rhys Stanley and playing Mark Blicavs in the ruck, leaving the Cats exposed in defence.

West Coast boss Adam Simpson might have been worried early after the Bombers got off to a decent start in Perth, but the reigning premiers soon found their groove and defeated the Dons by 55 points.

Nic Naitanui escaped with a fine after throwing Zach Merrett into the fence, meaning he will face the Cats in this must-win game.

Patrick Dangerfield to get 30 disposals @ $1.80 with Sportsbet
The 2016 Brownlow Medallist has accumulated over 30 disposals in his last three matches against the Eagles. Dangerfield played extremely well against the Magpies and almost carried Geelong over the line with 37 disposals and a crucial goal. If the Cats bring in a full-time ruckman, Danger should have an easier time in the centre.

Jack Redden to get 25 disposals @ $1.80 with Sportsbet
Redden is one of the league’s most underrated footballers. The former Lion goes out each week and gives it his all, and he lifts to a new level in the finals. We expect Redden to have another great game following his 29-disposal match against the Bombers, where he also laid six tackles and took nine marks.

Gary Rohan to kick two goals @ $1.80 with BetEasy
Rohan is one of the many Geelong players that would want to redeem themselves after Friday night’s shocker. The former Swan missed an easy shot at goal early in the game that set the tone for the wayward Cats. Rohan kicked four goals against the Eagles earlier in the year and could easily do it again.

Willie Rioli to kick two goals @ $1.75 with BetEasy
When finals come around there is a certain football family that continues to dominate every year. As per usual, Rioli lit it up at Optus Stadium and has his sights set on the MCG. Willie found acres of space against Essendon and if the Cats defend the same way they did against the Pies, a player like Rioli will make them pay with interest.

Total match points under 153.5 @ $1.89 with Bet365
The Cats play a conservative style that often ends in low-scoring matches. Although the Eagles like to go on the attack, they will have to get through the tough Geelong defence this Friday night. The Eagles also have one of the best defences in the competition, which will make scoring very difficult for Geelong.

If the Eagles plan on winning the AFL Grand Final again, they will need to win at the MCG three times in a row. The Cats have not proven anything after a poor on-field performance and an even poorer coaching effort. Geelong out in straight sets for us.