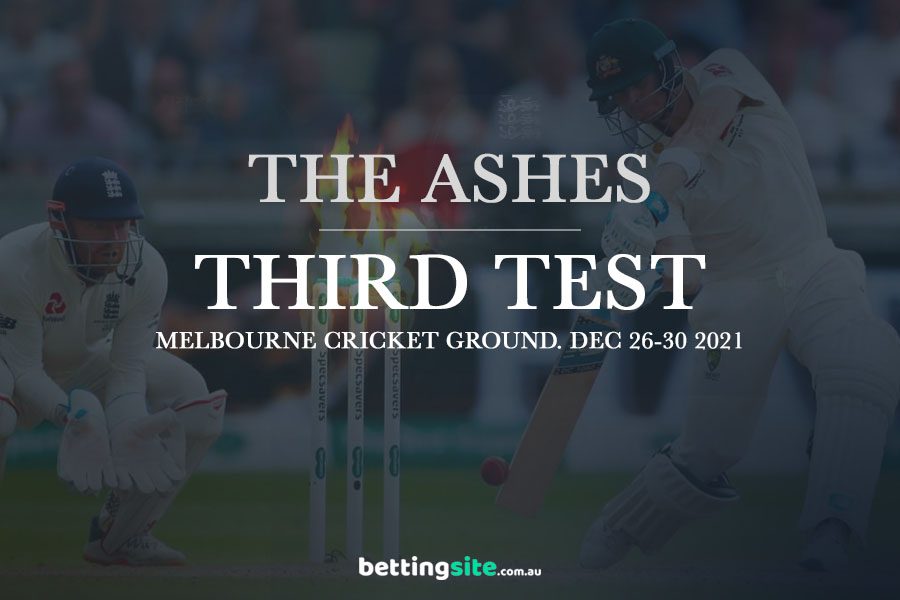 Australia are firm favourites to clinch the Ashes when they face an under-fire England side at the MCG in the Boxing Day Test, which kicks off this Sunday.

The second Test was eventful, to say the least, but an under-strength Aussie bowling attack did enough on the final day at Adelaide Oval to wear down the visitors and go 2-0 up in the series.

Now, with Pat Cummins (COVID protocol) set to return and Josh Hazlewood (side strain) pushing to prove his fitness, the hosts face some key selection decisions for the third Test.

Michael Neser is expected to make way for the captain, but the rest of the equation may depend on how cautious the national selectors choose to be with Hazlewood.

There is no concern about the depth of fast-bowling talent at Australia’s disposal; Jhye Richardson finished with match-winning figures of 5/42 in the second innings at Adelaide, while Mitchell Starc delivered another strong all-round performance.

Scott Boland’s addition to the squad has led to speculation that Starc could be rested for the MCG, where he has an indifferent first-class record, but the smart money says Cummins for Neser will be the only change to the Australian bowling unit.

Marcus Harris is under the pump after another pair of failures with the bat, but it appears as though the opener will have one last chance on his home deck.

Meanwhile, England coach Chris Silverwood and captain Joe Root are under immense pressure to get things in order at the selection table after copping a mountain of criticism for the lineups deployed in the first two Tests of the 2021/22 Ashes series.

The decision to leave out both Mark Wood and Jack Leach in Adelaide backfired spectacularly, especially after Root’s absence from the field on day four meant Ollie Robinson – England’s best seamer so far – was forced to bowl off-spin.

The bowling attack is only a fraction of the problem. With the tourists yet to pass 300 in an innings this summer, and with only two English batters – Root and Dawid Malan – managing half-centuries across two Tests, we can expect a shakeup for Melbourne.

Jos Buttler’s valiant rearguard action with the bat in Adelaide might just have saved his spot despite a chaotic display with the gloves, but Rory Burns and Ollie Pope may not be so lucky.

Jonny Bairstow is the favourite to replace Pope in the middle order, while it is expected that Malan will move to the top of the order so Zak Crawley – who is averaging 11.14 in Test cricket this year – can slot in at first drop.

With all that going on, it is no surprise to see England paying as much as $6.50 to claim an upset win at the ‘G, with the Aussies pegged as short as $1.40 with some cricket betting sites.

Last summer marked a rare failure for Steve Smith at the MCG, where he averages 91.60 with four centuries and three half-tons in eight Tests. Deputising as skipper in Adelaide seemed to breathe a bit of life back into Australia’s superstar no.4, and the $5.50 quote looks way overs for ‘Smudge’ to bring up a first-innings ton at his favourite venue.

While this Australian outfit might not stack up to the great teams of days gone by, the hosts are on track to make this a miserable summer for the visiting side. The Brits are a shambles; their squad is in disarray and there is zero confidence in the team’s leadership. The draw might come into play if we get an especially flat MCG wicket, but Australia’s superior bowling depth should get them across the line once again.