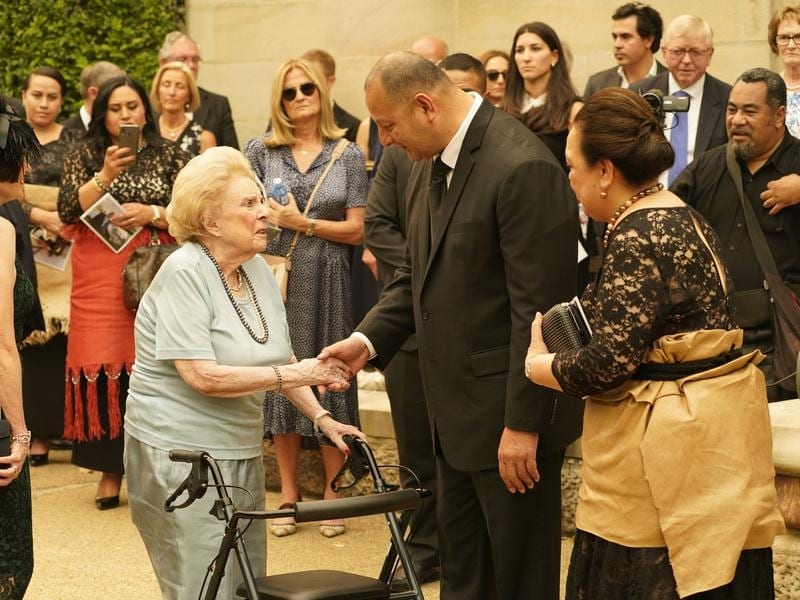 Tongan royalty has joined the Waterhouse clan to farewell family patriarch Bill Waterhouse at a service in Sydney.

King `Aho`eitu Tupou VI attended Thursday’s service as a tribute to Waterhouse’s long association with Tonga and its people.

He was the Honorary Consul-General to Tonga for many years after establishing a relationship with the heir to the throne, King Taufa’ahau Tupou IV, when he was in law school along with best friend, the late Neville Wran.

Her was also a property developer and hotelier and after the death of his brother Charles, Waterhouse gave up the law for the track.

He fearlessly took on legendary punters with names to match – the “Filipino Fireball” Felipe Ysmael, the “Hong Kong Tiger” Frank Duval and Kerry Packer who he said defaulted on a debt of more than $1 million.

While he was a leviathan bookmaker, Bill Waterhouse became a household name with the Fine Cotton scandal.

Bill and his bookmaker son Robbie were warned off racetracks by the Australian Jockey Club, the authority at the time, for having prior knowledge of the substitution of Bold Personality for the lesser performed Fine Cotton.

The Waterhouses were reinstated in 2002 by Racing NSW with Bill retiring in 2010 after working alongside his grandson Tom and teaching him the ropes.

His colourful life included a divorce and a second marriage to the same woman, Suzanne, who survives him.

Waterhouse’s granddaughter Kate and her children joined other mourners including former speaker of the House of Representatives, Bronwyn Bishop.