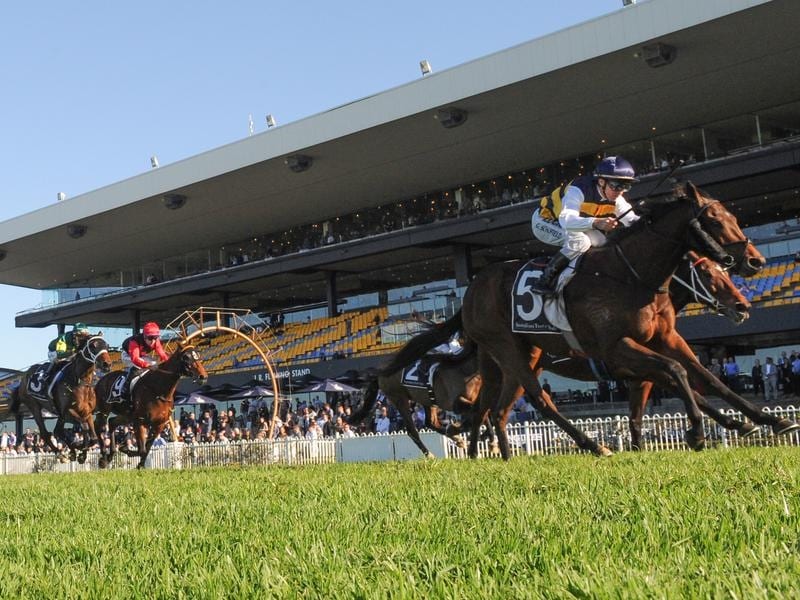 Imported stayer Azuro lived up to his reputation to claim a second Australian win for OTI Racing.

Imported stayer Azuro has shown his toughness to win the Stayer’s Cup at Rosehill, one of few races left on the Australian calendar over the 3200 metres of the Melbourne Cup.

The former French horse was sent out the $5 favourite on Saturday and lived up to his reputation to claim a second Australian win for syndicators OTI Racing.

He is trained by Ciaron Maher and David Eustace, who have a Sydney stable at Warwick Farm.

But Annabel Neasham, who runs the Sydney stable, said Azuro was a product of the trainers’ Ballarat operation.

“It was a long old race,” Neasham said.

“We were pretty confident although the heavy track was a bit of an unknown.

“It was heavy when he raced at Flemington but not as heavy as today.

“Ballarat is a really good facility for training stayers and he was fit even though it’s five weeks between runs.”

Glyn Schofield rode Azuro, who took the lead in the home straight and held off Doukhan ($7.50) by a half length.

“He toughed it out really well,” Schofield said.

“First and foremost I got him to relax.

“He over-raced with the blinkers last start so it was important today to get him to switch off and run the trip through.

“He did that and he’s only got a short dash but he kept rolling along and he toughed it out.”

Trained in France by Christophe Lotoux, Azuro won four races in his former homeland up to 2200m.

Azuro also ran in the Andrew Ramsden Stakes on May 25, finishing sixth with the winner Steel Prince exempt from a ballot on the Melbourne Cup in November.

There are no guarantees Azuro can make the Cup field but there are several other options.