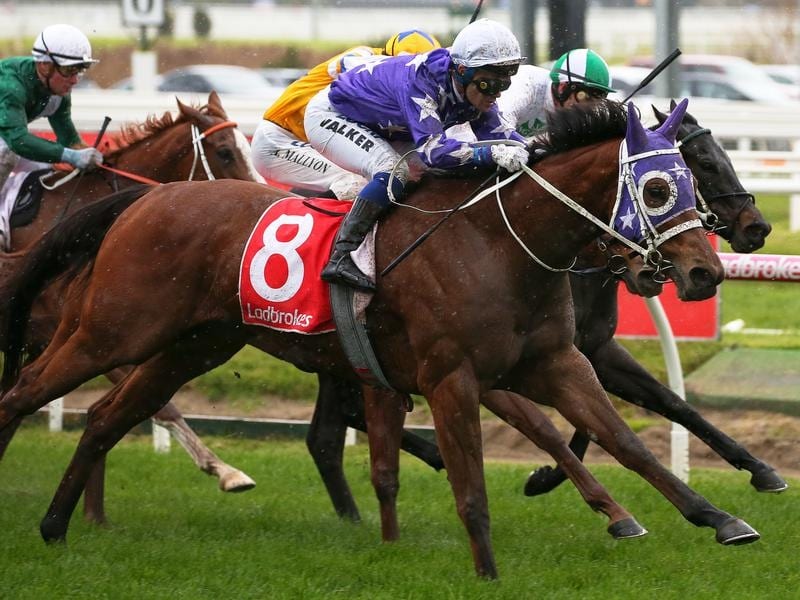 Saturday’s victory at Caulfield was Voila’s first from six starts this preparation.

The Chris Waller-trained filly Voila has overcome a slow start to claim the first win of her preparation at Caulfield.

Although he expected to settle in the second half of the field on Voila in Saturday’s MRC Membership Renewal Handicap (1100m), jockey Michael Walker was forced to come from last after she leapt in the air slightly as the gates opened.

Walker bided his time at the back of the field before Voila ($9.50) sprinted quickly down the outside in the home straight to overhaul her 10 rivals and score by a half-length.

Sweet Jazz, the $4.60 favourite, was second a short margin ahead of Calzini third.

“She was quiet but she was rocking a little bit in the gates and then she just jumped in the air at the start and missed it a couple of lengths,” Walker said.

“On paper I didn’t think it would matter because there was a lot of speed in the race.

“They ran along and then stacked up just before the home corner and I was able to get on the back of them.

“Because I had done no work, when I pressed the button she kept going and she picked them up pretty easily.

Voila won twice at Warwick Farm last campaign, while Saturday’s victory was her first from six starts this preparation.

“She has been so honest this whole preparation, so it’s good to see her come through and finally get that win,” Melbourne stable foreperson Jo Taylor said.