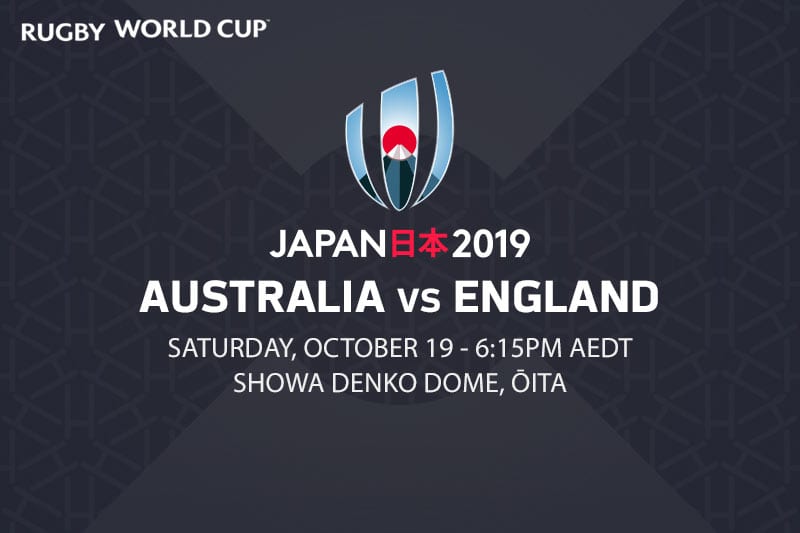 Two of international sport’s oldest and fiercest rivals will renew hostilities this weekend as we enter the 2019 Rugby World Cup quarter-finals.

Australia had no major issues in Pool D, with their controversial 29-25 loss to Wales the only blemish as they sewed up second spot ahead of Fiji, Georgia and Uruguay.

Wallabies coach Michael Cheika was not afraid to test the depth of his squad in the pool games, so there are plenty of selection questions to be answered.

The early mail suggests 19-year-old Jordan Petaia will start at outside centre, meaning James O’Connor will drop to the bench.

Reece Hodge is tipped to play on the right wing after serving a three-game ban, while Kurtley Beale will get the nod at fullback.

The other big change sees Will Genia line up at halfback alongside Christian Lealiifano, with Nic White to be listed among the replacements.

There are still questions as to whether Michael Hooper and David Pocock should start in the same side, but both are expected to feature in the Australian XV on Saturday night.

Wild weather in Japan prevented England from achieving a perfect record in Pool C, but they advanced as the top seed regardless ahead of runner-up France and also-rans Argentina, Tonga and the United States.

The Brits did not quite make it through unscathed, however, as they have a few injury concerns to deal with.

Jack Nowell is out with a hamstring injury, which will most likely see Jonathan Joseph fill the vacancy on the bench.

Billy Vunipola sprained his ankle in the pool win over Argentina, but the Saracens forward is expected to play after a strong training session during the week.

Australia +8.5 handicap – $1.91 at Ladbrokes
The Wallabies showed in their narrow loss to Wales that they have come to play. They were unlucky in that game and will feel they deserved something from it. Australia vs England clashes are rarely as straightforward as they seem and the underdogs should make a real game of it.

Jonny May anytime tryscorer – $2 at Sportsbet
You would have cleaned up if you backed Luke Cowan-Dickie to be England’s top tryscorer in the RWC 2019 pool stage, but one suspects the Brits will look to more traditional attacking outlets in the knockout rounds. May is an obvious threat on the wing and will take plenty of minding.

England to win by 1-12 points – $2.80 at Sportsbet
The Wallabies have not done a lot wrong at RWC 2019 so far, but there is no denying England are the stronger team on paper. They blitzed their group and should get the win in Oita, although the Aussies will make them earn it.