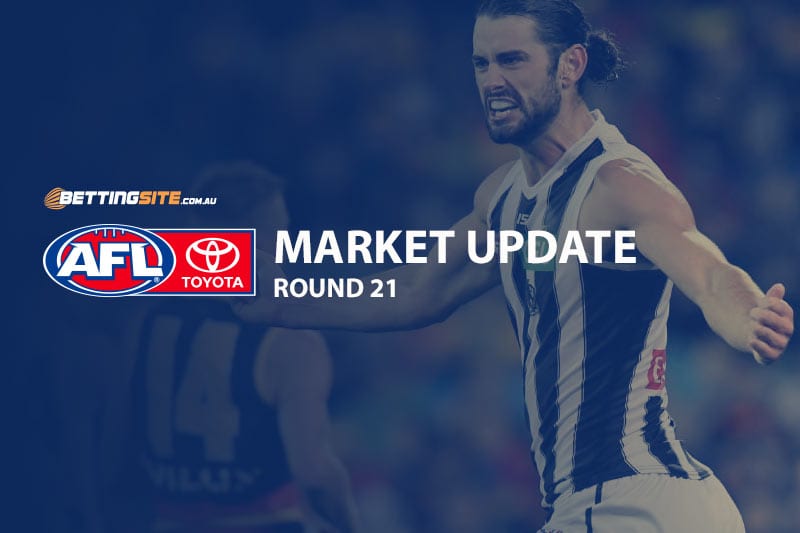 As we edge closer to the end of the 2019 AFL Premiership season, the top seven teams are all but solidified.

The differential between 14th and eighth is only two wins, which means six teams outside the eight can still reach finals.

While this week is filled with tough matches to tip, only one of them features two teams inside the eight.

Let’s take a look at the latest AFL odds at Sportsbet.

The Giants are starting to gain momentum coming into the finals, beating the Swans last week without Jeremy Cameron. The Hawks will want to spoil their party with a win on the road. The Giants start at $1.33, giving Hawthorn $3.25. See our GWS vs Hawthorn preview here.

An old rivalry between the Demons and Magpies will flare up again this week at the MCG. Although the Dees are no chance to play finals, they will still give the Pies a run for their money. Collingwood will start favourites at $1.44, with Melbourne priced at $2.75.

No team has been as inconsistent as Port Adelaide this season, which was highlighted by their 59-point win over the in-form Bombers. There is a slim chance Lance Franklin could suit up for the trip to Adelaide, but it looks unlikely. Power are $1.41 at home, with Sydney $2.85 underdogs.

This could be one of the most one-sided contests of the season if the Lions smell blood before the bounce. The Suns ($8.50) were embarrassed by an injury-riddled Collingwood outfit last week, so they could be in for another tough day if the Lions ($1.06) put the foot down.

Chris Scott will have to plan for a different type of North Melbourne now that his brother Brad has moved on. The Cats are still $1.32 favourites despite poor form and the Roos are at a healthy $3.30 after rallying from a slow start to beat Hawthorn last Friday.

This monumental clash at Marvel Stadium could define the entire season for both sides. The Bulldogs ($2) can still make the finals if they win this week, but they will have to defeat a very capable Essendon ($1.80) squad that has a point to prove after a shock loss to Port. See our Essendon vs Bulldogs preview here.

The Saints must win this match if they want to keep alive their hopes of making the finals. Fremantle also has finals aspirations and a slightly easier equation than St Kilda, so winning this match is top of the agenda. Saints are hometown favourites at $1.72, leaving the Dockers with $2.10.

Despite extremely short odds of $1.14 for Richmond to win, Carlton fans have hope that their $5.50 Blue Baggers can land another huge upset before moving on to 2020. The Tigers have been clinical of late and should not drop this game, although the Blues were valiant against the Eagles last week.

Premiership favourites West Coast will host the Adelaide Crows at Optus Stadium to conclude round 21. The $1.22 Eagles are obvious favourites against the $4.15 Crows, who have been fluctuating in form over the past month. See our West Coast vs Adelaide preview here.

The premiership race is down to six clear contenders. Equal favourites on top of the market are the Tigers and Eagles, with the latter climbing up after defeating the Blues away from home. Essendon’s price has blown out to $41 after a huge loss to the Power at home, while the Bulldogs have fallen to $151 from last week’s $67 quote. Geelong’s defeat to the Dockers has pushed the Cats out to $4.50.