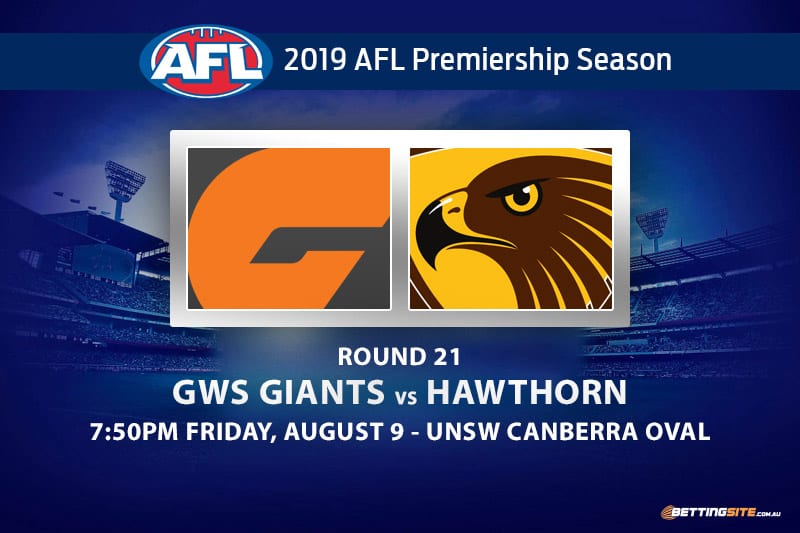 Two teams that must win for different reasons will face off in Australia’s capital to kickstart AFL Round 21.

The Greater Western Sydney Giants and Hawthorn Hawks are sitting fifth and 12th on the ladder respectively with three games to go.

GWS must win in order to keep its top-four aspirations alive, while the Hawks will probably have to win each of their remaining matches to qualify.

Previous matches between these two teams have been interesting, with the Hawks winning the most recent by over five goals, the Giants winning the one before that by 11 points, and the previous clash ending in a draw.

A hamstring injury to Grant Birchall puts a line through his season and maybe his career, but the Hawks will be able to cover for his absence with Jack Scrimshaw, who has worked hard in the VFL returning from a knee injury.

The Giants could pull the trigger this week and bring back a host of guns like Jeremy Cameron, Josh Kelly, Matthew de Boer, Daniel Lloyd and Dawson Simpson, but they will more than likely play it safe and simply recall Adam Kennedy after a dominant stretch in the NEAFL.

Lachie Whitfield to get 30 disposals @ $2.10 with Sportsbet
After peppering the 30-disposal mark for the past three weeks since returning from injury, now is the time for Whitfield to impose himself on the competition again. The Hawks do not have a player capable of negating Whitfield on the outside.

James Worpel to get 30 disposals @ $2.63
Worpel has collected 30 disposals or more in five of his 30 games in the AFL. What’s most interesting is that the emerging Hawk has posted over 30 in three of his last four matches. Given that form line, Worpel is a very good shout at those odds.

Brent Daniels to kick a goal – Best odds at Ladbrokes
Not many pundits would say Daniels is one of the Giants’ best players, but his forward pressure and impact play make him a very important cog in a talented team. GWS coach Leon Cameron puts Daniels in the most dangerous positions and he pulls it off week after week.

Jack Gunston to kick two goals
The multiple All-Australian forward has been kicking goals for the Hawks for years, but his output in the forward half has diminished in recent weeks. Gunston has had few chances to impact the scoreboard when playing in defence and on the wing, but he worked well inside 50 last round and should stay there this week.

GWS to lead at every break @ $1.83 with Sportsbet
With their ability to start matches like a house on fire, the Giants should grab an early lead and not let go. They piled on 50 points against the Pies in the opening quarter a couple of weeks ago, sending out a warning to any team visiting them for the rest of the season.

Now that we are entering crunch time in the AFL, the best teams will stop dropping easy wins and continue to impose themselves before the finals. That means the Giants will win this week and extinguish Hawthorn’s hopes of reaching the top eight.