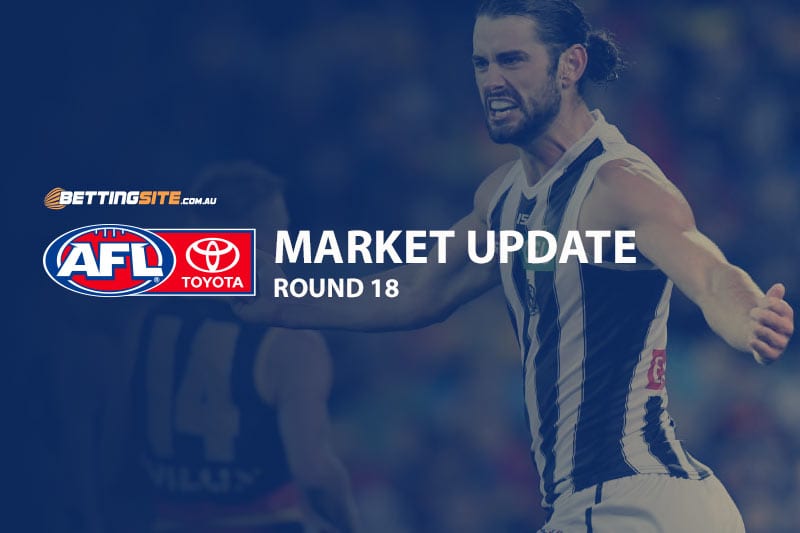 Round 18 looms as one of the most important weeks of footy this season.

With no odds blowing out beyond $4, there is plenty of money on both sides of the match lines at Sportsbet.com.au.

The squeeze for finals will put pressure on a handful of teams this week, and it will be interesting to see how they handle it.

The 18th round of the season kicks off with the Crows and the Bombers at Adelaide Oval. Despite being one of the in-form teams, the Dons are $2.80 outsiders while the home side is sitting comfortably at $1.40. The Bombers have won five of their last six and will give the Crows a run for their money.

With a majority of their injured players back, the Tigers are $1.25 favourites for Saturday’s lunchtime fixture at the MCG. After last week’s capitulation against Brisbane, the Power are priced at $3.70 to spring an upset away from home.

The two bottom sides on the AFL ladder will be put to the test at Marvel Stadium this Saturday. Carlton has won three of its last five matches since David Teague took control as interim coach, while Suns boss Stewart Dew is asking for a priority pick after 12 consecutive defeats. It’s fair to say this will be the shortest Carlton odds in years at $1.25, with Gold Coast at $3.70.

The match of the round may be this Saturday afternoon special between the GWS Giants and the Collingwood Magpies. After a stunning upset win over West Coast in Perth last week, the Pies enter at $1.95. The Giants, riddled with injuries, are slight favourites at $1.85. Team selection is going to be crucial for this game.

The red-hot Lions ($1.35) have the same number of wins as the Magpies and Eagles, last year’s grand finalists. North Melbourne ($3.05) was unlucky to lose last week to the Bombers, who snatched the points in the dying seconds with a brilliant snap from Anthony McDonald-Tipungwuti.

Rounding out the Saturday clashes will be the Dockers and the Swans, who have both faded out of the run for finals in recent weeks. Fremantle is a healthy favourite at $1.59, giving the Swans a backable $2.26. This is another match where team selection could prove decisive.

These arch-rivals have dealth almost exclusively in thrillers over the past 10 years. Hawthorn is starting to get the ball rolling, winning its last two matches, but the Hawks will be $3.34 outsiders this week. Geelong is still top-of-the-ladder and will be favourites at $1.32.

The Demons have had a horror season and will not make the finals this year. The Eagles need to bounce back after last week’s loss to the depleted Magpies. The Dees at home are still $2.75 against the reigning premiers, who are paying $1.43 for the win.

With Alan Richardson and the Saints ($2.90) parting ways this week, anything can happen. This will be the second time this year the Bulldogs ($1.38) have faced a side that has a new coach. The Dogs have been one of the hardest teams to pick all season, so the scene is set for an entertaining and unpredictable contest.

A few more upsets have triggered a similar string of movements to last week’s AFL Premiership betting update. The Magpies beating the Eagles has moved Collingwood into $5.50, tied with the Tigers after their win over the Giants. Stephen Coniglio’s injury has seen GWS dive down to $17. The Brisbane Lions have sprung two upsets consecutively to jump into the top five at $10. Keep an eye on the Bulldogs, who have moved into $51 after winning three straight games.