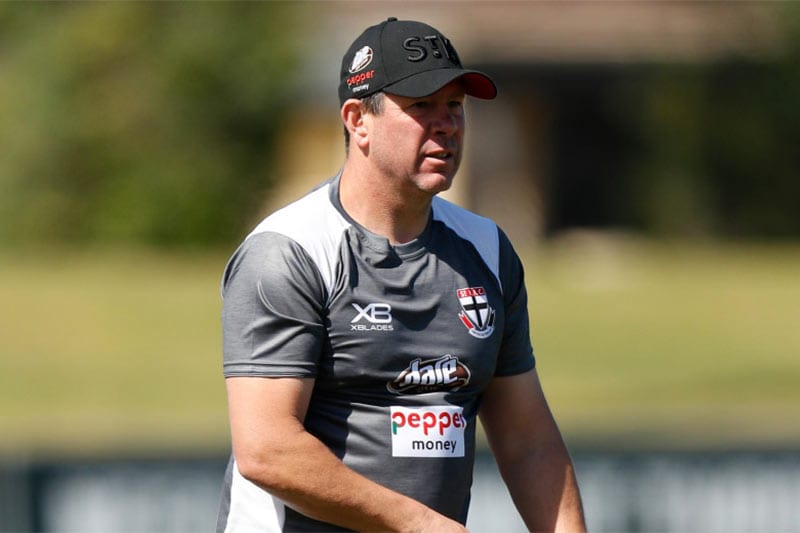 After coaching the St Kilda Saints for six years, the time has finally come for Alan Richardson to part ways with the club.

New of Richardson’s resignation came through on Tuesday morning and was confirmed when he fronted the press later in the day.

The former Collingwood player coached the Saints in 126 matches but only won 43, making him statistically the worst head coach of the club to exceed the 100-game mark, with a winning percentage of 34%.

Not only did Richardson struggle to win matches, he was never able to take the Saints to the finals.

With his time finished at St Kilda, the question is: who will the club hire to fill the vacancy?

Brett Ratten has stepped up from his role as assistant coach to take the reins for the remainder of the season, yet the former Carlton gaffer is not the favourite to get the job on a full-time basis.

Leading the charge on $1.70 odds at Sportsbet.com.au is Brad Scott, who is looking for a new gig after North Melbourne sacked him earlier this season.

Ratten is next in the betting at $3.50 due to his already-established connection with the club and his prior record with Carlton, who he coached to finals appearances in 2009, 2010 and 2011.

Also in the running is Robert Harvey ($5), the former St Kilda champion and current midfield coach at Collingwood. His experience under Nathan Buckley at the Pies may give him an edge over some of the other names on the list.

Another former head coach in the top few candidates is Michael Voss ($6.50). Although he struggled with an ordinary Brisbane Lions list from 2009-2013, Voss has put in the hard yards since joining the Port Adelaide staff five years ago and recently expressed interest in taking on another top job.

Rounding out the top five is a person who is known for his stint at the Saints. Ross Lyon ($9) is currently coaching Fremantle, but he could be on the lookout for a new challenge if the Dockers fall much further by season’s end.

Our tip to take the wheel at Moorabbin is the current caretaker. Ratten has long been touted for a second attempt as head coach and already has a strong relationship with the St Kilda playing group and the football department.