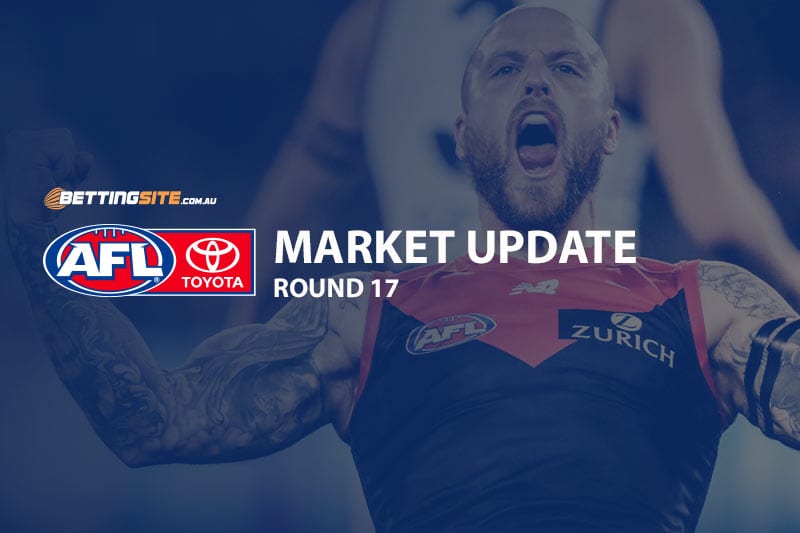 One of the most important rounds of the 2019 AFL season will take place this weekend.

There are several critical matchups on the cards, ranging from a top-four clash between last year’s grand finalists to a game which could determine who does and doesn’t make the top eight.

Without further ado, let’s see how the odds are shaping up at Sportsbet.com.au.

Round 17 kicks off with one of the most hotly anticipated matches of the year. The Eagles will enter Friday’s clash at Optus Stadium as $1.37 favourites, while a run of poor form has led to the Magpies starting at $2.92.

The Saturday schedule commences with the Swans and the Blues at the SCG. Carlton’s fortunes have improved markedly since the sacking of Brendon Bolton, but David Teague’s charges still sit at $3.20 against the $1.33 Swans.

After Hawthorn beat the Magpies and Fremantle was embarrassed by West Coast, the Hawks will begin with short odds of $1.42, leaving the Dockers at $2.73. The conditions in Tasmania will make this match one to keep an eye on.

The Bombers and Kangaroos have both played a much better brand of football in recent weeks, especially the Roos. We think North will be the best value of the weekend as $2.05 outsiders. The Dons are still looking good at $1.76, so this could easily be the game of the round.

Back in 2009, this was the must-see matchup in the AFL. But while the Cats have stayed strong, the Saints have fallen down the pecking order. Geelong is the unbackable favourite at $1.06, with the Saints at long odds of $7.50.

The Saturday night fixture is filled with interesting matches, one of which sees the Suns and Crows clashing at Metricon Stadium. Online bookmakers are predicting the Crows will bounce back as $1.17 favourites, whilst the struggling Suns are out at $4.65.

Sunday’s opener is another contender for match of the round. The fourth and fifth teams in the 2019 AFL Premiership betting will battle it out at the MCG, with the Tigers paying $1.48 at home and the Giants at $2.60 to get the upset.

Once again, the Bulldogs pulled off a massive upset with their win over the Cats last week. They are $1.51 favourites against the Demons, who struggled without Max Gawn when they faced the Blues and are rightly priced as $2.50 underdogs.

The final contender for match of the round sees the red-hot Power hosting the even-hotter Lions at Adelaide Oval. Both clubs pulled off upsets last week and are filled with confidence. The Lions are outsiders again at $2.25, leaving Port Adelaide as $1.62 favourites. This match is about as predictable as a coin toss.

The race for the 2019 AFL Premiership has been blown open after even more critical upsets occurred in Round 16. Three of the previous top four in the outright betting were unable to secure a victory, thus shuffling the market tremendously. The Eagles are now on the second line at $4, while the Tigers have leapt to $7.50 and pushed the Giants down to $9. Brisbane have moved into $15 with their big win and the Bulldogs are looming as late finals bolters at $81.