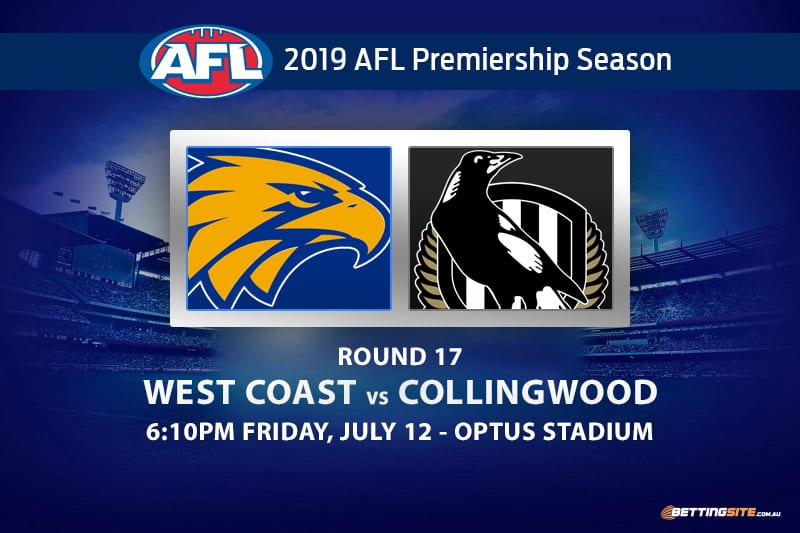 The second of this year’s AFL Grand Final rematches between the West Coast Eagles and Collingwood Magpies will take place this Friday night at Optus Stadium.

Not only did the Eagles win the big dance in 2018, they were able to beat the Pies three times in the one season.

They followed up their AFL Premiership victory with another win over Nathan Buckley’s men in Round 3 earlier this year.

Collingwood is in the midst of its worst form slump in years, mainly due to a combination of injuries and a crucial suspension.

The Pies have only averaged 59.5 points per match since Jaidyn Stephenson was banned on gambling charges, as opposed to the 92 they averaged beforehand.

West Coast has found another gear in the last fortnight after beating the Hawks at the MCG and smashing the Dockers by 91 points.

Selection will be critical for the Magpies, who have the option to bring in Taylor Adams, whilst the Eagles can bring back spearhead Josh Kennedy after he was rested last week.

Elliot Yeo to get 25 disposals @ $2
If any player has dominated the Magpies over the past two seasons, it is Elliot Yeo. He amassed 36 disposals in the qualifying final last year and followed up with another 21 touches when these two met earlier this season. If he plays in the midfield, Yeo will come very close to 30 disposals by the night’s conclusion.

Adam Treloar to get 30 disposals @ $1.40
The extremely fit and powerful Adam Treloar has been finding the footy at will, despite the recent misfortunes of his team. When the Pies lost to North Melbourne two weeks ago, Treloar was able to get 40 disposals, and this week could be a similar situation. With his back against the wall, the Collingwood no.7 will stand up.

Eagles vs Magpies Round 17 goalkicking tips

Josh Kennedy to kick three goals – Best odds at Ladbrokes
With a week’s rest and a good training run under his belt, Josh Kennedy will be itching to get out on the ground this Friday night. Few players in the AFL can kick as many goals as Kennedy when he is playing well, while he loves to face the Magpies and should thrive against their short backline.

Jordan De Goey to kick three goals
Jordan De Goey was involved in a driving scandal during the week and experts say he should not play. Now that we know he is available and ready to redeem himself, expect Jordan to get plenty of the ball up forward. He kicked three great goals in the 2018 AFL Grand Final and will want revenge against the Eagles.

West Coast Eagles -24.5 @ $2.30
Considering the current form of both sides, we are taking these odds with open arms. The Magpies cannot formulate an attack from the back half, whilst the Eagles beat Freo by 90-odd points last week without their best forward.

Eagles vs Magpies Round 17 match predictions

Collingwood has not been troubled by a team this badly besides the Hawks, who beat the Pies in last week’s upset. The Eagles will look to push their winning streak against the Maggies out to five matches at Optus Stadium this Friday night.