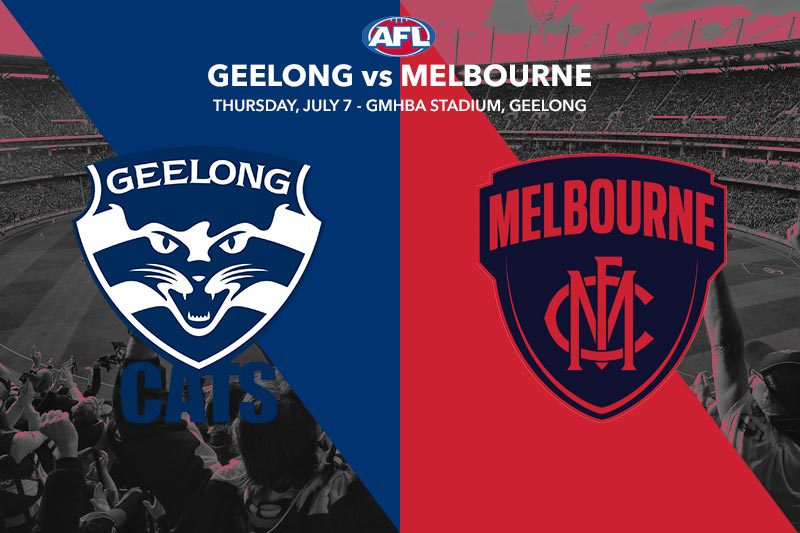 Top spot on the AFL ladder is up for grabs this Thursday night in what should be a ripping contest between the Geelong Cats and Melbourne Demons at GMHBA Stadium.

The reigning premiers have been favourites to win this year’s AFL Grand Final for most of the season, but that could change this weekend depending on how well the Cats perform on their home deck.

One of the main talking points heading into this contest will be the fitness of Max Gawn and Luke Jackson, as the Demons desperately need at least one of the pair to fill a spot in the ruck against the Cats.

Champion backman Tom Stewart is still suspended for Geelong after his brutal hit on Dion Prestia in round 15, but he is the only player missing from their best 22 heading into Thursday night.

The Cats will come into this game off a five-day break, although they hardly had to break a sweat in their 112-point demolition of North Melbourne last weekend.

Round 16 was also a positive one for Melbourne, who registered an important 29-point victory over the Crows in Adelaide despite not fielding a recognised ruckman.

When you watch Christian Petracca break tackles, hit difficult kicks and put through jaw-dropping goals in big moments, it is hard not to think of the way Patrick Dangerfield applied his craft for so many years. The two powerful midfielders are near-unstoppable in full flight, as they can rack up disposals and hit the scoreboard in multiple ways.

Dangerfield has been parked forward by Chris Scott in the past to add another avenue to goal, as he poses a difficult matchup for opposition defences. The same can be said about Petracca, who finally had his kicking boots on in round 16 as he slotted three goals. Both players are prominent in the disposal markets, but the juicy odds can be found among the goalkicking betting options.

It is always hard to judge a side following an easy win against this year’s expected wooden-spooners, but we think the Cats have a very big point to prove this week against a side that smashed them in last year’s preliminary final. The Demons have returned to their best over the last fortnight, but this Geelong side can be clinical at GMHBA Stadium, so we are backing the hosts for the win.

Although Patrick Dangerfield has only kicked four goals for the Cats this season, we still consider him one of their most affective players in the front half of the ground. Steven May and Jake Lever will be hard for Tom Hawkins and Jeremy Cameron to beat consistently, which may force Chris Scott to move Dangerfield forward. We fancy the 2016 Brownlow Medal winner to kick a couple.

We are tipping the Cats to pip the Demons this Thursday in a thrilling contest, with Patrick Dangerfield starring up the ground and Mitch Duncan at his reliable best in the middle.