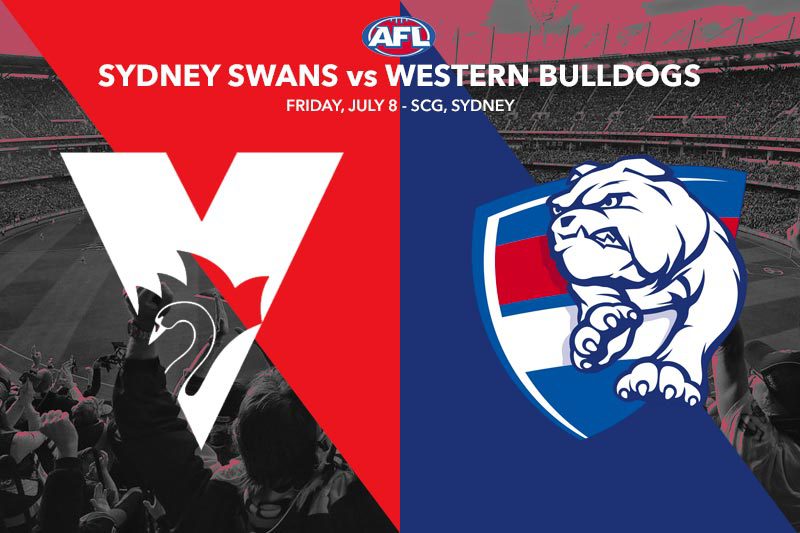 The race for top-eight spots on the AFL ladder heats up when the Swans host the Bulldogs at the SCG this Friday night in a must-win game for both teams.

The Sydney Swans were hopelessly beaten by the somewhat rejuvenated Bombers in round 16 and now face the real threat of slipping from the top eight. After running up a solid first-quarter lead, Sydney opted to play shootout footy against an inferior team and were exposed.

This was Sydney’s second poor performance on the road, following their loss to Port Adelaide, and favourite backers might be reluctant to take the shorts offered going forward. We have been unimpressed by the Swans’ lack of consistency this season and expect them to fall again when hurdles are encountered.

The Western Bulldogs also let things slip in their trip to Brisbane and are now on very thin ice. The Dogs matched the Lions for the first half but were overrun after the long break as their scoring dried up. They should be motivated to win every quarter in the coming weeks.

The Bulldogs sit top five in all key stats except hitouts – a meaningless number given they are the top-ranked side for clearances. Based on those numbers, the Dogs should play finals, and we are sticking with them despite their current ladder position.

Young Sydney midfielder Chad Warner had a day out against the Bombers, and the wraps on this kid are huge. The 21-year-old grabbed 25 disposals, booted three goals, and won seven clearances in round 16, all while sporting a bad, schoolboy-style hairstyle. Warner’s ability to kick straight on a day when his more seasoned colleagues struggled to split the big sticks has Swans fans extremely bullish on his prospects.

Bulldog champion Marcus Bontempelli has been a bit hot and cold this season, going at 22.7 disposals per game – a little ways short of his 26.7 average last year. He has been landing 4.9 tackles and winning 4.6 clearances per game, but the Dogs need him to find his absolute best in the coming weeks. ‘The Bont’ will be out to school his young opponent here, and we are expecting a big performance.

The Swans are warm favourites back on home turf, and the line has been set at a narrow 8.5 points. The Sydney weather is expected to clear somewhat come game day, and the total points line is set at a relatively high 157.5 points. With so much to play for, and superior overall stats, we are betting on the Dogs to spring an upset. They would be well served adopting an open, free-scoring style and trying to blow the Swans off the park. We are ignoring the line bet and tipping the Dogs straight-up.

For those looking to fully capitalise on our upset tip, we suggest linking the Dogs to win with some other likely outcomes. Our same-game combo is the Bulldogs to win, into Cody Weightman anytime goalkicker, into Aaron Naughton 2+ goals, into Bailey Dale 25+ disposals. This ambitious parlay will return $5.71 courtesy of Ladbrokes.