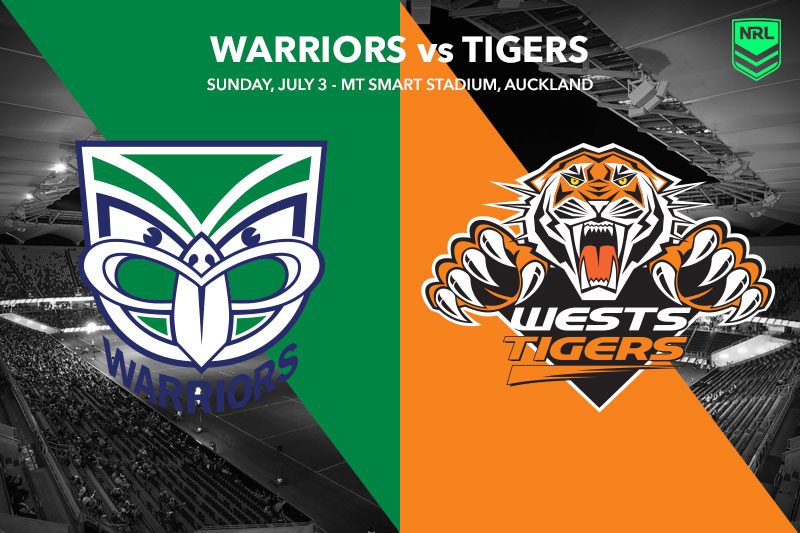 Sunday afternoon football kicks off with what will be one of the more memorable days in recent NRL history as the New Zealand Warriors return to Mt Smart Stadium to take on the Wests Tigers. Remarkably, Chanel Harris-Tevita and Jazz Tevaga are the only two players in the Warriors squad who featured in the team’s last league game on home soil. Tevaga was in fact quoted in an interview leading up to the match saying, “we’re going to thump them”. Will the Warriors complete a fairytale comeback in front of their home crowd?

Reece Walsh has been ruled out of what would be his first game at home for the Warriors with COVID-19. Harris-Tevita could be the one to replace Walsh, who will be part of a backline reshuffle that has seen Euan Aitken move into the centre position. For the Tigers, James Roberts returns in the centres, while Alex Twal has been lost through concussion and replaced by young forward Stefano Utoikamanu. Adam Doueihi continues his return from an ACL injury and remains an outside chance to shift somewhere into the starting side prior to kick off.

The Warriors are hard to go past as the on-top pick in this match. Statistics and form can only go so far in professional sport, and it’s expected the Warriors stand up and put on a show for their home fans. The Warriors and Tigers are relatively evenly matched, given they have both been rather poor this season. This creates value in the winning margin markets, as the Warriors should play above their recent form and secure a win by 13+ points. That outcome pays a juicy $3.40 with BetOnline.

With Walsh ruled out due to injury, Harris-Tevita becomes more likely as an anytime tryscorer than the current $5 odds suggest – especially if the Warriors’ return to Auckland rejuvenates the attacking game of Shaun Johnson and, in doing so, brings Ronald Volkman further into the game. Harris-Tevita will likely be playing off strong shape, and being as strong and skilful as he is, he’s incredibly likely to score any time.

The Tigers shouldn’t go without points of their own, and one man who has thrived in the NRL since his promotion from reserve grade is David Nofoaluma. The winger scored one try against the Bulldogs to go with eight tackle breaks, not to mention his four tries and 15 tackle breaks last weekend for Samoa against the Cook Islands. At $2.10 to cross at any time, Nofoaluma is a great pick for any same-game multi tickets.

Both sides have shown as much of an ability to score points as they can concede them. Between these two teams, so far this season they average 42 points scored against them per game, while the can also scored 30 points per game on average. Should the Warriors be spurred by their return home, and should the Tigers find more points in attack, it’s easy to see the total points line (42.5) being surpassed on what will be a dry deck at Mt Smart Stadium.

Both these five-eighths come into Sunday’s match with very different lead-ups and motivations. Ronald Volkman began the year at the Roosters and may not have expected to play first grade; now he’s looking to prove he belongs at the top level. Luke Brooks, on the other hand, is the big-money man at the Tigers who is reportedly fighting for his future at the club. Both these five-eighths will be playing with halfbacks responsible largely for game management and kicking. They also have dynamic fullbacks who can break the game open at any time. Whoever of Volkman and Brooks takes advantage of the platform set for them and uses their outside backs better will be the winner of this battle and the game.