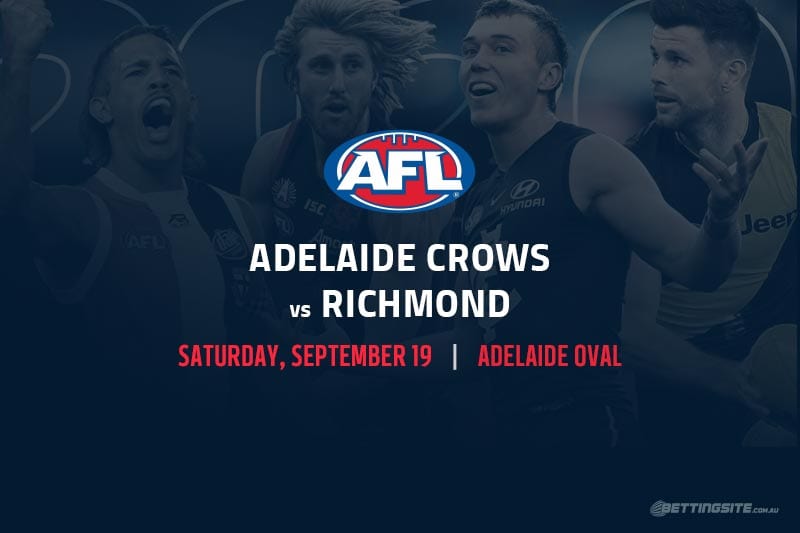 The Richmond Tigers have built slowly but steadily to sit third on the ladder heading into the final round of the AFL 2020 season, but a loss to the 18th-placed Crows could see them drop out of the top four.

If North Melbourne loses to the West Coast Eagles and Adelaide manages to beat Richmond, the Crows will overtake the Kangaroos and dodge the spoon despite going 14 rounds without a victory.

Bryce Gibbs steps aside after an excellent display in his farewell game, making room for Paul Seedsman or Will Hamill to return for the Crows.

Josh Caddy and David Astbury have overcome their injury woes and could feature for Richmond, while Shane Edwards is out of quarantine and will make his first appearance since round five.

With Soldo ruled out for Richmond in the ruck, Reilly O’Brien needs to step up for the Crows. In the 2019 battle against the Tigers, O’Brien was among the best on ground as Adelaide won by 33 points. The big Crow has already surpassed 15 disposals in six matches this season and usually stands out against teams that lack a star ruckman.

With Lynch out injured, the rest of the Richmond forwards need to step up and fill the void. Jack Riewoldt has kicked a goal in 13 straight games and multiple goals in five of his last seven, including his four against Geelong last round. Riewoldt has also kicked two goals in two of his last three clashes with Adelaide, highlighted by a strong performance in the 2017 AFL Grand Final.

Somehow, the Adelaide Crows have turned things around in the last three rounds and given their supporters hope for 2021. Although the Tigers recently beat the Cats with two players injured, we see the Crows putting in a strong performance at Adelaide Oval. Richmond is on a four-game losing streak against Adelaide, but the Victorian powerhouse should do enough to get the points this weekend.