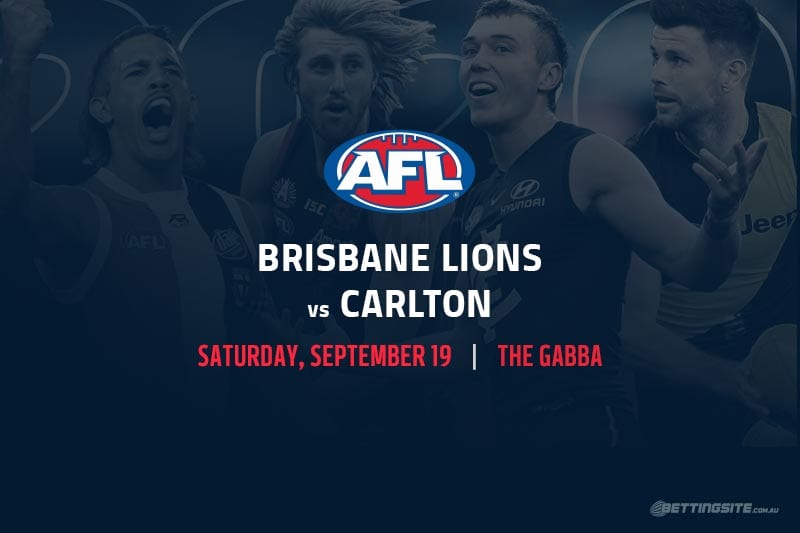 Prime-time footy at the Gabba is something we’re now used to, and this Saturday night is no different. The Brisbane Lions will look to fine tune any issues they have ahead of their AFL 2020 finals campaign, while Carlton will be playing for a bit of pride considering they can no longer make the top eight.

Brisbane are coming off a workmanlike performance against the Sydney Swans on Sunday night in Cairns, but they were able to show their class in the last quarter. If they win on Saturday night, the Lions will go top of the ladder; and if Collingwood can topple Port Adelaide on Monday, Chris Fagan’s crew will snatch the minor premiership.

The Carlton Blues had a horrendous first two-and-a-half quarters against the last-placed Adelaide Crows, but they pulled it back to a somewhat respectable 16-point margin by the final siren. Blues fans can only hope their boys put up a much bigger effort for Kade Simpson’s final game of AFL footy.

The line at -25.5 for Brisbane looks to be a touch generous. Carlton were deplorable last week against Adelaide, and they will face a proper uphill battle if they dish up a similar display against the second-placed Lions. Brisbane will want to put in a proper four-quarter performance before they head into a finals campaign where they’ll look to make up for last year’s straight-sets exit.

Dayne Zorko had his best game of the year when the Lions took care of the Suns at the Gabba two weeks ago, but he was nowhere near as good against the Swans last week. While the Brisbane skipper hasn’t exactly set the world on fire this year, he will be looking to put his best foot forward heading into the postseason with a big performance against the Blues.

One of Carlton’s modern-day greats will hang up the boots after this match, although it won’t be due to a lack of form. Simpson consistently pulls in 15+ disposals each game, and we’re predicting he will bow out in style. The ball spent a lot of time in Carlton’s defensive 50 last week as he racked up 19 touches, and we can expect much of the game to be played in Brisbane’s forward half on Saturday night.