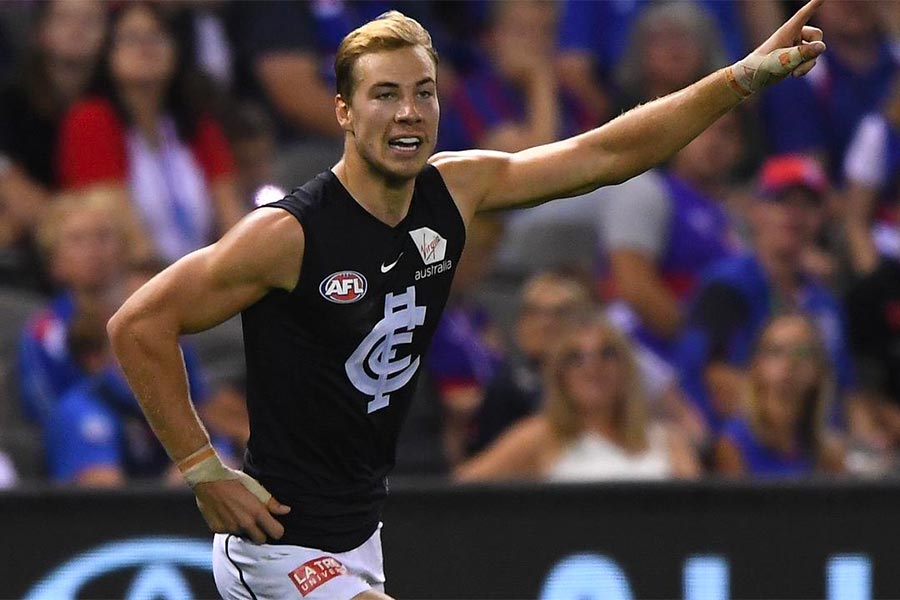 The 2021 AFL season was an interesting season for the goalkickers, as there were a few hot starters who could’ve won the award, but the consistency of Carlton’s Harry McKay ultimately earned him the Coleman Medal.

It can be hard picking a Coleman Medal winner before round one, but we have gone through this year’s market and picked out our favourite options, so here are a few prospects we think you should keep your eyes on throughout the season.

Harry McKay was exceptional for the Blues in 2021, kicking a total of 58 goals in just 19 matches, despite featuring in a not-so-potent offensive unit. The Blues will get better this season with the addition of Adam Cerra, who is known for his effective kicking inside 50. McKay will be a huge threat once again this year and should be your first consideration at this point of the year given the Blues’ high ceiling.

Although Aaron Naughton is not the best kick in front of goal, he takes plenty of marks and provides himself with an abundance of opportunities in the forward half. Naughton is one of the best contested marks in the league and runs into very dangerous positions, giving his classy midfielders every chance to hit him lace out. Naughton has the potential to win the Coleman this season if he can straighten his kicking, so look out for him in the opening rounds of the season.

It would be a fairy tale for Buddy Franklin to kick his 1,000th goal and win his fifth Coleman Medal in the same season, but it is not a farfetched scenario. Franklin managed 51 goals from his 18 matches in 2021, which was very close to the numbers Harry McKay produced. Buddy used to enjoy getting up the ground and doing damage from outside 50, but it looks like John Longmire will utilise him more out of the goal square this year to keep him fresh. If he stays fit, and if the Swans continue to be a top-three scoring team in the competition, Franklin will be there or thereabouts.

Max King has not even played 50 AFL matches, but he has the potential to be one of the best players in the competition. King looks even fitter this year after an uninterrupted preseason, which is critical for a young player on the verge of a breakout year. Not many defenders can stop the tall forward, whose speed and agility make him a nightmare for any opposition side. The Saints just need to kick the ball in his direction and King should do the rest.

Our only smokey pick for this season’s Coleman Medal is Matt Taberner, who can barely be considered a smokey after kicking 37 goals for the Dockers last season. Taberner has the height and athleticism to tear games apart, but he almost appears too relaxed on the field at times. The Dockers are a chance to push for finals this year, and their big forward could be the key to victory; he just needs to start showing more aggression and hunger for the football.