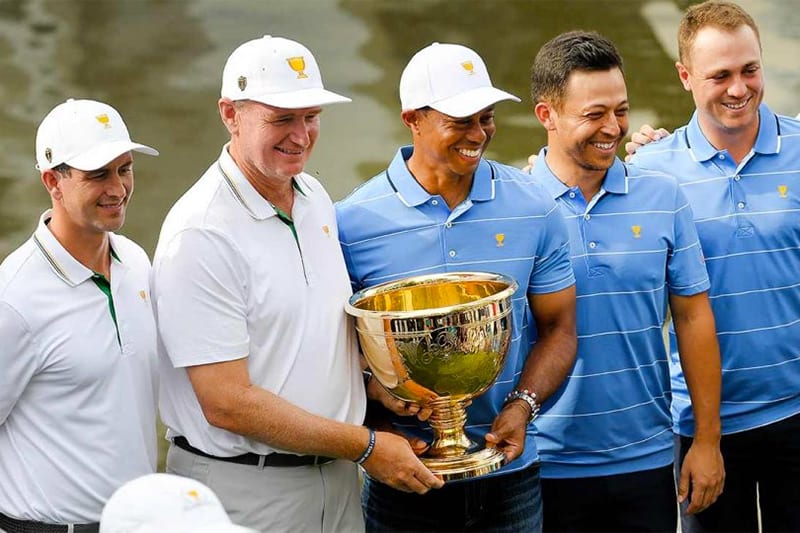 The golf world turns its collective attention to Royal Melbourne this week for the 13th edition of the Presidents Cup. The United States will start the four-day team tournament as $1.40 favourites at Sportsbet.com.au, and it is not hard to see why.

The Americans have won 10 of the 12 previous Presidents Cup meets, including each of the last seven. The 2003 event in South Africa ended in a tie, while the USA’s only defeat came way back in 1998.

The United States also dominate the upper end of the world golf rankings. Every man on the USA’s 12-strong team sits inside the top 25, while their opponents have only three players – no.18 Adam Scott, no.20 Louis Oosthuizen and no.21 Hideki Matsuyama – in that bracket.

It does not help that the Internationals ($3.75 at Sportsbet) are missing one of their brightest lights. Jason Day was an obvious captain’s pick despite an inconsistent year on the PGA Tour, but the big-hitting Queenslander was forced to withdraw due to a back injury sustained in the lead-up to last week’s Australian Open.

At least Ernie Els and his underdogs will not have to deal with Brooks Koepka. The world no.1 was locked in for the trip to Australia until he injured his knee in October, which saw Rickie Fowler called up in his stead.

The other source of optimism for the Internationals is the venue. Their only Presidents Cup win came at Royal Melbourne in 1998 when the likes of Steve Elkington, Shigeki Maruyama, Greg Norman, Nick Price and Vijay Singh led the hosts to a resounding 20.5-11.5 win.

Both of this year’s team captains were part of that tournament. While Els dropped only one of five matches, Tiger Woods finished with two points in his rookie appearance.

A curious feature of this year’s event is the number of fresh faces on both sides. The United States have five players who have never played in a Presidents Cup, while the Internationals now have seven rookies with An Byeong-hun stepping in for Day.

Louis Oosthuizen for top International scorer – $7 at Ladbrokes
While it is tempting to back one of the Aussies to shine on home soil, Marc Leishman, Adam Scott and Cameron Smith were some way short of their best in last week’s Australian Open. Oosthuizen, meanwhile, finished one shot off the lead at The Australian and comes in with the best Presidents Cup win record (56.67%) on the International team.

Dustin Johnson for top USA scorer – $8 at Ladbrokes
Several of the Americans boast excellent Presidents Cup records, including Justin Thomas (3-1-1 in 2017), Webb Simpson (5-3-2 over two events) and Tiger Woods (61.25% win rate). But it is hard to look past Johnson, who has dropped only four of 14 matches in three appearances at the Presidents Cup.

Patrick Cantlay for top rookie scorer – $5.50 at Bet365
Cantlay has always had the talent, but now he has the temperament to match. He heads to Australia on the back of 15 consecutive cuts made, a run that includes a big win at The Memorial Tournament in June. Xander Schauffele is the bookies’ favourite among the rookies, but Cantlay’s odds are too good to pass up.

CT Pan for lowest overall points scorer – $3.75 at Sportsbet
While he is not quite the lowest-ranked player in the field, Pan Cheng-tseung is widely regarded as the weakest of several suspect links in the International team. The Taiwanese star missed the cut at the Australian Open and will need to turn it around in a big way if he is to have a positive impact at Royal Melbourne.

United States -3.5 handicap – $1.90 at Sportsbet
The easiest way to compare any two teams is to look at the quality of their reserves. While Rickie Fowler has been ranked as high as no.4 and boasts top-three finishes in all four majors, An Byeong-hun is yet to crack the top 15 in either the world rankings or the majors. Team USA should walk it in.