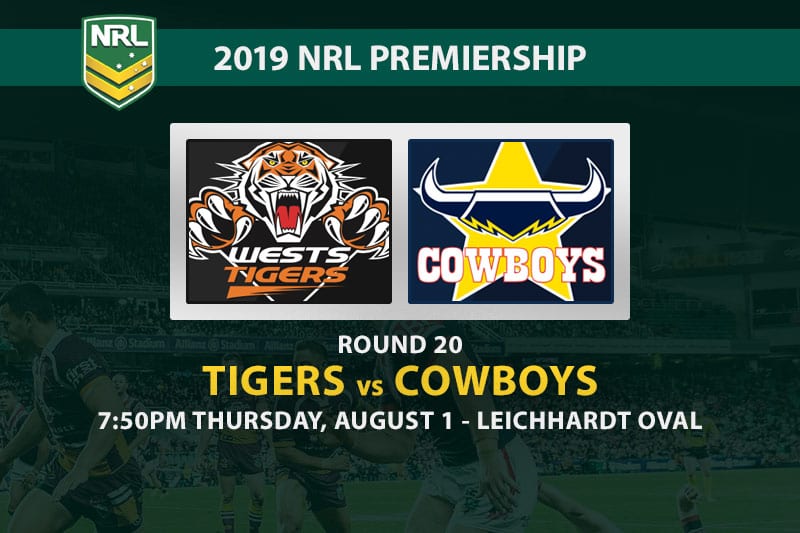 It’s crunch time for Wests Tigers and the North Queensland Cowboys as the NRL finals tick closer with each passing week.

Wests are a point and percentage outside the top eight after last week’s win over Newcastle, while the Cowboys’ loss to Cronulla leaves them two points further back.

Neither side can afford to drop many games in the run home now that the likes of Brisbane and Penrith have found their mojo, so there is plenty on the line in Thursday’s clash at Leichhardt Oval.

Coach Michael Maguire has made no changes to the 17 that edged out the Knights. Michael Chee Kam is named despite going to hospital with a head knock last week, so there could be a late change if he fails the required concussion tests.

Michael Morgan is back after a spell out with a concussion issue, which sees John Asiata benched and Corey Jensen dropped. Coen Hess impressed at centre against the Sharks and retains his starting spot for the trip to Sydney’s western suburbs.

Corey Thompson – The former Widnes Vikings star has notched five tries when starting a fullback this season, four of which have come in the past five rounds. Thompson scored the Tigers’ first two tries against Newcastle, so the form is good.

Kyle Feldt – Even when the Cowboys are down, Feldt is always a threat in the final third. The Townsville lad has found the line with regularity since returning to action in round nine and will be NQC’s primary outlet again this Thursday night.

This clash could make or break either team’s chances of making the finals. Wests have looked good in patches this year and fought back well to beat Newcastle last time out, so they should fancy their chances against the Cowboys at home.