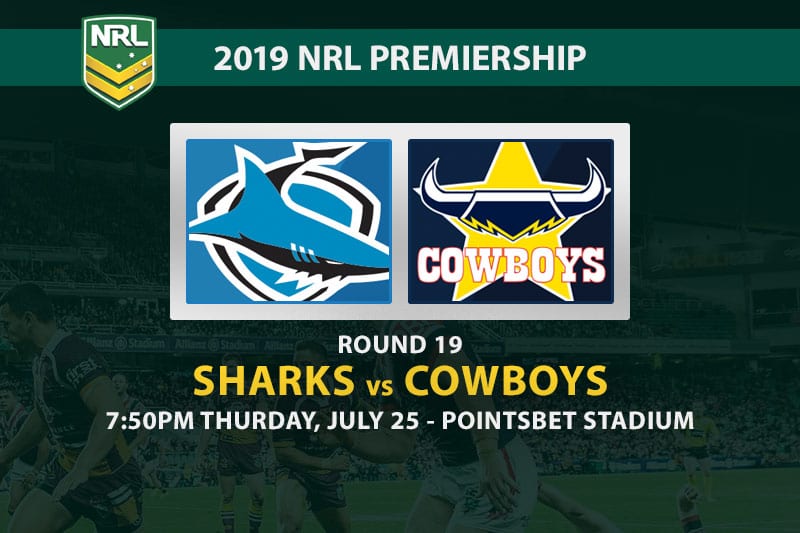 Two teams in very ordinary form will look to snap out of their funk on Thursday night at PointsBet Stadium.

Once prominent players in NRL Premiership betting, the Cronulla Sharks have plummeted from the top six to 11th place on the back of five consecutive defeats.

Paul Gallen and company will be smarting after coming out on the wrong side of a 19-18 scoreline against the NZ Warriors last week.

North Queensland snatched a surprise win over Sydney a couple of weeks ago, but it did not take them long to fall back into old habits.

Having tested Souths for most of the game, the Cowboys conceded three tries in the last 10 minutes to go down 30-18 and thus throw away a golden chance to climb into the top 10.

Results aside, the coach and the fans will demand an 80-minute effort from North Queensland this week.

Josh Dugan comes in at fullback for Matt Moylan, who is set to miss with a minor leg injury. Andrew Fifita is out suspended, which sees Braden Hamlin-Uele start at prop. Josh Morris returns at centre, Kurt Capewell shifts to the second row and Billy Magoulias lines up on the bench.

Cowboys boss Paul Green has stuck with the same 17 that lost to Souths last time out. There is still no sign of versatile playmaker Michael Morgan, whose concussion worries have kept him out of action since the conclusion of the State of Origin series.

Bronson Xerri – Cronulla’s young centre has not troubled the scorers in over a month, but we know how dangerous he can be. Xerri looks a good option with a few players shuffled around the back half this week.

Kyle Feldt – North Queensland’s gun winger has looked good since returning to action midway through the season. Feldt has scored six tries in nine games this year and will be the Cowboys’ key outlet at Shark Park.

Sharks vs Cowboys Round 18 betting predictions

Neither of these teams are much chop at the minute. Cronulla have gone ice-cold at a time when they should be heating up, while NQC are yet to find their feet in the post-Thurston era. The Sharks have to win at home, but don’t expect too many highlights besides the head-to-head battle between Paul Gallen and Jason Taumalolo.