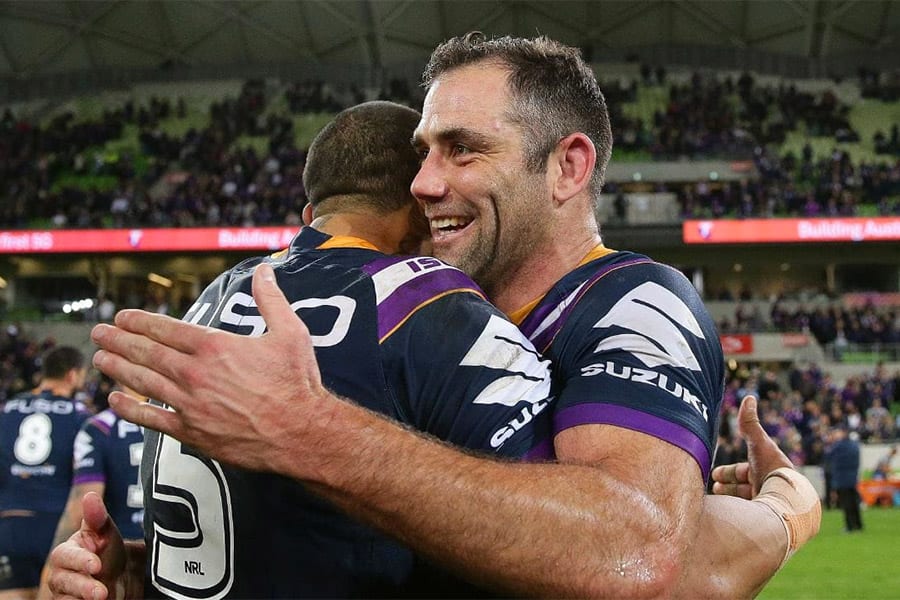 The regular rounds are done and the brackets are set for the 2019 NRL finals.

Week one will see two of the top eight culled, with two teams advancing to the preliminary finals and the other four playing off in the semis.

The biggest question is: who will lift the trophy on the first Sunday in October?

Let’s take a look at each team’s chances and find out which are the best bets to win the 2019 NRL Grand Final.

Despite a few ordinary displays in the run home, Melbourne finished three games and a shedload of percentage ahead of the rest.

One of their four defeats this year was a shock reverse to Canberra, who will return to AAMI Park in the first week of finals.

Whichever way you spin it, the Storm were far and away the best side in the home-and-away rounds and enter the playoffs as one of the teams to beat.

Sydney took advantage of a favourable run home to win eight games in a row before falling to Souths in the final round.

Still, the Roosters did enough to finish two points clear in second place as they look to back up last year’s NRL Grand Final triumph.

Two losses to the Rabbitohs is a worry, but the Chooks are a class above most other teams and premiership favourites for a reason.

Souths have been the streakiest team in the NRL this year and could be a real threat after winning their last three games in the regular season.

One of those was against the Roosters, who they will face once again in the opening week of the finals series.

The Bunnies have some big names back, including star winger Alex Johnstone, so they have to be considered genuine contenders.

Although they slipped to fourth on the ladder, Canberra are widely considered the biggest threat to Melbourne and Sydney’s title hopes.

The Raiders boast one of the best defensive units in the NRL, which should serve them well in the hustle and bustle of finals footy.

Ricky Stuart and his charges have already conquered AAMI Park this year, so they will head to Melbourne in week one with plenty of confidence.

If the Raiders are the steadiest team outside the top two, then the Eels are the most volatile.

Parra’s best is about as good as it gets, but their willingness to take risks in attack leads to all sorts of chaos when things don’t go to plan.

While they are a very good chance to win their home final and reach the semis, it remains to be seen whether Brad Arthur’s men can do any damage in the final fortnight.

A few weeks ago, Manly Warringah loomed as serious challengers for the 2019 NRL Premiership title.

Then Tom Trbojevic went down injured again, and now the Sea Eagles are struggling to stay aloft.

Manly’s defence has been poor in recent weeks, so you can bet that will be the key focus for Des Hasler ahead of the clash with Cronulla.

Even though they finished four points shy of Parra and Manly, Cronulla have drawn plenty of money in the NRL 2019 outright betting all year.

A mix of old heads and emerging talent gives the Sharks a nice balance across the park, while a solid points differential suggests they are a cut above the teams below them.

Cronulla are a good chance to beat Manly and reach the last six, but it would take something extra special to win the flag from seventh.

Brisbane have fought hard in recent weeks, but their last-round loss to Canterbury highlighted several of the flaws that have dogged their season.

The Broncos have the second-worst points differential among the top 11 teams, due in no small part to their struggles against the better teams.

Anthony Seibold’s men copped an absolute hiding at Bankwest Stadium earlier in the year and may suffer a similar fate when they return this weekend.