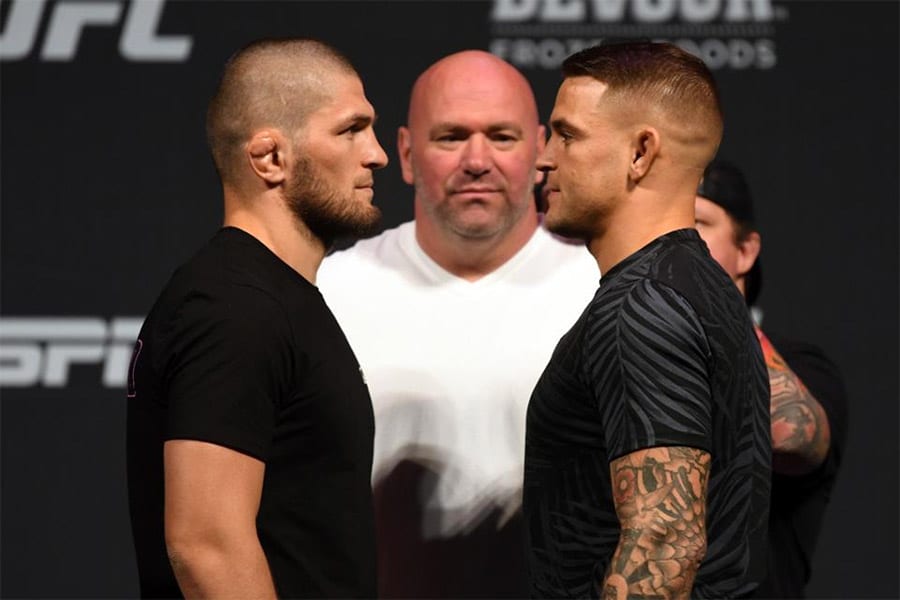 Prelims from 12am AEST Sunday, September 8

Khabib Nurmagomedov headlines the main card in UFC 242, which will take place this weekend at The Arena in Abu Dhabi, United Arab Emirates.

Four of the five fights will be lightweight bouts, showcasing how much talent the division currently owns, while a very interesting heavyweight match is also scheduled.

Dustin Poirier is the man who will take on the undefeated Khabib this time around, which could either be Khabib’s first-ever loss or his 28th victory.

Let’s take a look at the latest UFC betting markets and see where the value lies on the main card.

Khabib ($1.22) is yet to lose a fight and takes an impressive 27-0 record to the UAE. The lightweight champion’s intense submissions and crafty footwork stun most opponents in his path, including Conor McGregor last year.

Poirier ($4.30) is a capable southpaw fighter that has secured 25 victories in his 30 bouts. The American fighter is one to keep an eye on, but Khabib is clearly the choice here. Nurmagomedov is too natural on the deck and will be at an advantage each time he brings down Poirier.

Poirier absorbs more hits than Khabib, but it will not matter when the grappling master gets a hold of him. Khabib will only have to wrestle with Poirier a handful of times before he wins this fight.

Khabib Nurmagomedov to win by submission @ $2.88 with Sportsbet

These kickboxers will rematch at UFC 242 after Barboza ($1.64) won their previous bout in 2015. The Brazilian-American is a very strong Muay Thai fighter who kicks his opponents until he can pinch the victory. Although a poor defensive fighter, he has plenty of offensive capabilities and a solid 20-7 record.

At 16-4, Felder ($2.27) has plenty of time left to build a great UFC record. A good wrestler and grappler when needed, the martial artist has used his solid fundamentals to win fights. Felder will look to apply pressure to Barboza in a bid to win by either submission or points decision, but whether his opponent will give in is another question.

Barboza has more power and is a difficult fighter to surpass. He will get his second victory over Felder in this fight.

Makhachev ($1.27) has trained alongside Nurmagomedov and will look to get his sixth consecutive win in this fight.

Ramos ($3.82) is looking to notch his fifth win in a row if he can dodge the quick hands and wrestling of Makhachev.

Both fighters are very skilled and have great records, but Makhachev has a massive advantage on the floor.

Islam Makhachev to win @ $1.27 with Sportsbet

Blaydes ($1.20) has only ever lost two fights, both to the second-best heavyweight fighter in UFC, Francis Ngannou. The American has more takedowns (40) in nine fights than any other heavyweight in UFC history.

Abdurakhimov ($4.60) is a heavy underdog against the dangerous Blaydes, but he will have half a chance if he can land a few early punches and stay on his feet.

That said, Blaydes is clearly the choice in this bout and will use his superior wrestling game to break any rhythm that Abdurakhimov tries to build.

Curtis Blaydes to win @ $1.20 with Sportsbet

While both these fighters bring similar strengths to the table, Taisumov ($1.37) has knocked out his last 15 opponents and is favoured to do so again.

Ferreira ($3.14) is another brilliant lightweight fighter that has a knack for strikes and submissions. If he can overwhelm Taisumov early, this fight could be done and dusted by the second round.

Both fighters have incredible power, but Mairbek appears more dangerous and has the form to boot.

Mairbek Taisumov to win @ $1.37 with Sportsbet