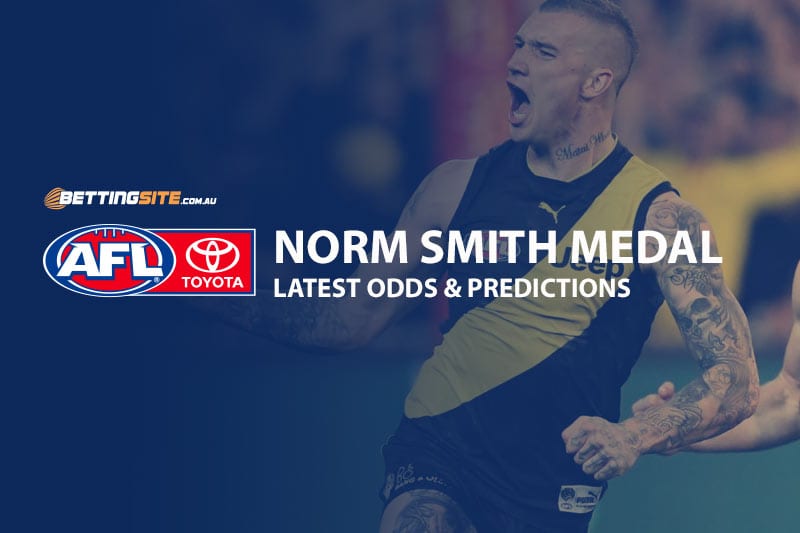 For every AFL Grand Final since 1979, the Norm Smith Medal has been given to the player deemed best on ground.

This is one of the most prestigious and desired awards in the AFL, with some in the footy community rating the Norm Smith an even greater honour than the Brownlow Medal.

Also on that list is Dustin Martin, who is aiming to join Gary Ayres, Luke Hodge and Andrew McLeod as one of the elite few to win two Norm Smith Medals.

The unrivalled intensity of the GF makes it extremely difficult to pick a winner, so online bookmakers tend to provide excellent odds for every player.

Here are three players for each team in this year’s AFL Grand Final between the Richmond Tigers and GWS Giants who are likely to win the Norm Smith Medal.

If you watched the Richmond and Geelong preliminary final last week, you completely understand this tip. Lynch kicked five goals in a brilliant display of forward craft under serious pressure. He knows how to kick bags and looks ready to fire on the biggest stage. At $10 with Sportsbet, it is hard to leave out the key forward for the Tigers.

Looking back on the Richmond’s 2017 AFL Grand Final victory, Houli was extremely unlucky not to receive the Norm Smith. If he has a flashy game at half-back for the Tigers, the former Bomber will be in contention and may earn a few sympathy votes from his 2017 effort. Houli played a brilliant 30-disposal game against the Giants in round 17 and had 32 touches last week against the Cats, so the form is there.

Riewoldt was far from his best in the prelim victory over Geelong, but his resilience is one of his greatest attributes. He is the type of player that gets up for the match no matter what and he knows what it is like to play in the big dance. If Riewoldt can get up the ground and mark the ball well while also kicking a few goals, he will be a great choice at $17.

Despite constant drama with the Match Review Office, Greene is one of the most watchable players in the AFL. Whether it is his ability to win the ball in tight contests or take a great mark forward, the versatile Giant has that rare ability to take a game by the scruff of the neck and turn it his way. Greene’s 34-disposal and two-goal performance against Richmond in round 17 was worthy of a BOG.

Cameron’s performance against the Tigers in round three will go down as one of the greatest individual displays in modern footy, let alone the 2019 season. Not only did the key forward kick seven goals, he also tallied 30 disposals and polled three Brownlow votes. If Cameron can expose the absence of Alex Rance again this week, he will clearly be in the running for the Norm Smith Medal.

Our smokey for the Norm Smith Medal is one of the most versatile players in the AFL. Williams normally applies his trade at half-back and provides run and penetration for the Giants, but a recent move into the midfield has given him the opportunity to dominate matches. The Narrandera product has had multiple 30-disposal games this season and has pushed forward with a few goals too. If the Giants decide to release him into the guts, he will be one to keep an eye on at $23.

Our tip for the Norm Smith Medal depends on which team wins the match. If the Giants are to win their maiden AFL Grand Final, we believe Toby Greene is the best bet for the Medal; but if Richmond end up winning, we think Bachar Houli.