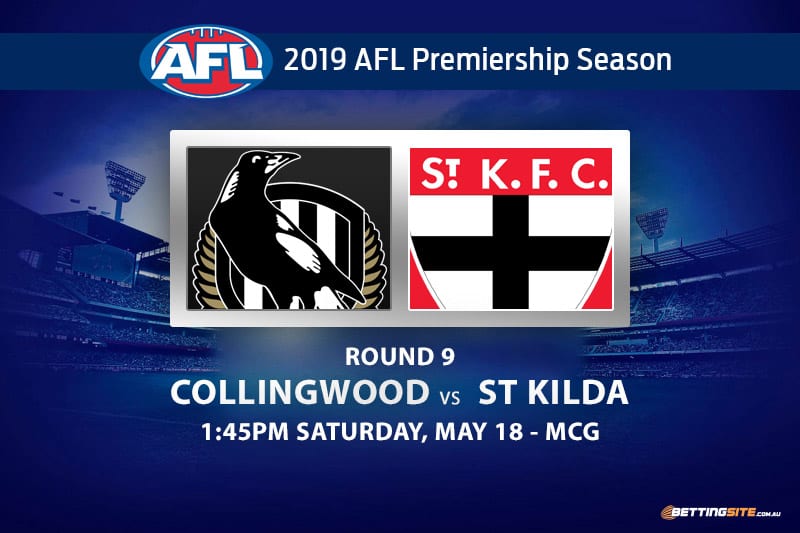 It was nine years ago when these two clubs played in the last drawn AFL Grand Final.

History aside, both the Collingwood Magpies and St Kilda Saints have many common traits.

Collingwood is the in-form team in the competition with the longest winning steak of five consecutive matches.

The Saints started well and were even sitting on top of the ladder during round five, but they have lost three straight games to halt all forward momentum.

Many players for these clubs enjoy running fast and kicking long, but the Pies have been slightly more accurate than the Saints, which is why they sit 10 positions apart on the ladder.

Both teams will want to move the ball quickly and will enjoy the space of the MCG.

Jack Billings to get 25 Disposals @ $1.36
Two years ago, Billings was playing in the forward half of the ground and accumulated 28 disposals against the impressive Collingwood defence. This season, Billings has been moved onto the ball and has found the footy very often, getting over 30 touches regularly. The Magpies have very good on-ballers and it will be hard for Billings to work his craft, meaning the 25-disposal mark is a good option.

Tom Phillips to get 30 Disposals @ $2.10 with Sportsbet
Although Phillips has played 58 matches across his four-season career, this will only be the second time he encounters the Saints. In his first match against the Saints last season, Phillips was crucial and found the footy 30 times. Phillips is a known footy magnet and will play well this week.

Collingwood Magpies Over 13.5 Goals @ $1.78
Even whilst playing sub-par football last week against the Blues, Collingwood managed to kick 16 goals from 26 attempts, mainly due to a seven-goal last quarter that secured the match. If the Pies can kick seven goals in one quarter of football, they will be able to kick 14 over the course of a game.

St Kilda Saints Over 9.5 Goals @ $1.81
Even though the Saints have been bereft of talent over the past few seasons, the strong presence in the forward line has always been apparent. With Tim Membrey, Josh Bruce and Matty Parker in the forward 50, it would be a very upsetting match if the Saints did not get to double digits in the goal’s column.

Jaidyn Stephenson @ $11.00 with Sportsbet
This young superstar has been kicking goals since he was born and hasn’t taken a backwards step at senior level. Stephenson has played extremely well the past fortnight, slotting six goals, with the first goal of both matches. We think he is a huge chance to do it again this week as he is such a difficult match-up for the Saints.

Magpies vs Saints Round 9 predictions

An alarming stat that has confused the footy world is how a club plays the week after facing the Blues. No side has won a match this season after battling with Carlton, which gives us the inclination to take the Saints at the line.