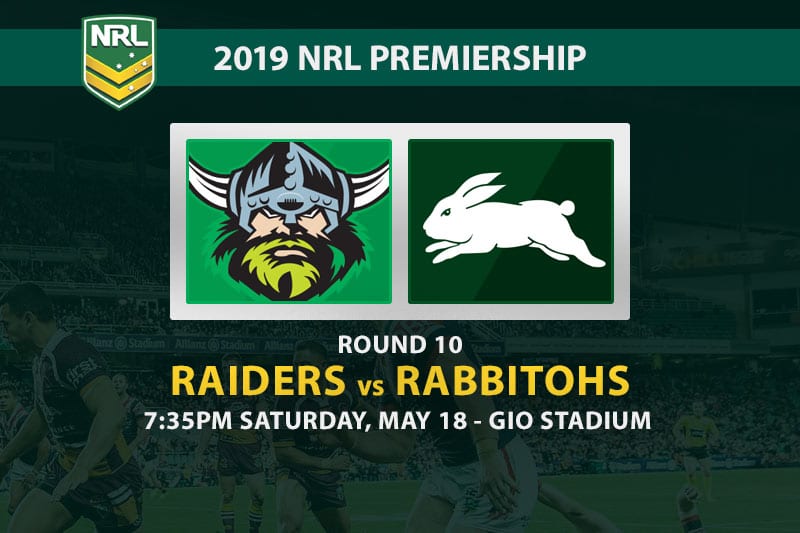 It is difficult to pin down a single standout matchup in round 10 of the 2019 NRL Premiership season, but Saturday’s clash in the capital is a strong contender.

The Canberra Raiders came up short in their tussle with Sydney last week, giving up a 30-6 lead before storming back with three tries late in the second half.

That loss, combined with Melbourne’s demolition job against Parramatta, saw Ricky Stuart’s men slip to fourth on the NRL ladder.

Now they face an equally tough task against one of the form teams in the competition.

The South Sydney Rabbitohs have somehow managed to burrow under the radar, but their last two outings have reminded everyone of their flag credentials.

The Bunnies were brilliant against Brisbane a fortnight ago and followed it up with a 32-16 win over North Queensland in the Magic Round to stay level on points with the Roosters.

Adam Reynolds and Cody Walker continue to press their cases for State of Origin selection, with the latter leading the NRL for tries with 10 from the halves.

Even with John Bateman out for Canberra, no fewer than six British players are named to play in this fixture – a league record.

Kiwi winger Jordan Rapana is sidelined with a knee injury, which sees Bailey Simonsson promoted to the starting 13. Nick Cotric moves to centre and Michael Oldfield heads to the flank, with Sebastian Kris filling out the interchange.

Souths have also had to shuffle their back half, with Corey Allan shifting to fullback in place of the injured Alex Johnston. Mawene Hiroti steps into the no.2 jersey.

Canberra’s Kiwi fullback is on a bit of a tear at the minute. The former NZ Warriors star has found the line in three games straight and looks very decent value to get his name on the score sheet at some stage.

All of Walker’s 10 tries this season have come when starting at five-eighth – a remarkable feat in anyone’s language. He has scored eight of those in the past five rounds, so get around him while he’s hot.

Canberra vs Souths stats and trends

Canberra have shown they are the real deal, but injuries in key positions are starting to take their toll.

Can they match one of the best teams in the competition without John Bateman, Joey Leilua and Jordan Rapana?

Souths have so much quality in the back half that even the loss of their star fullback might not make much of a difference.

The Raiders will put up a fight at home, but the Bunnies are in great touch and should cover the line.