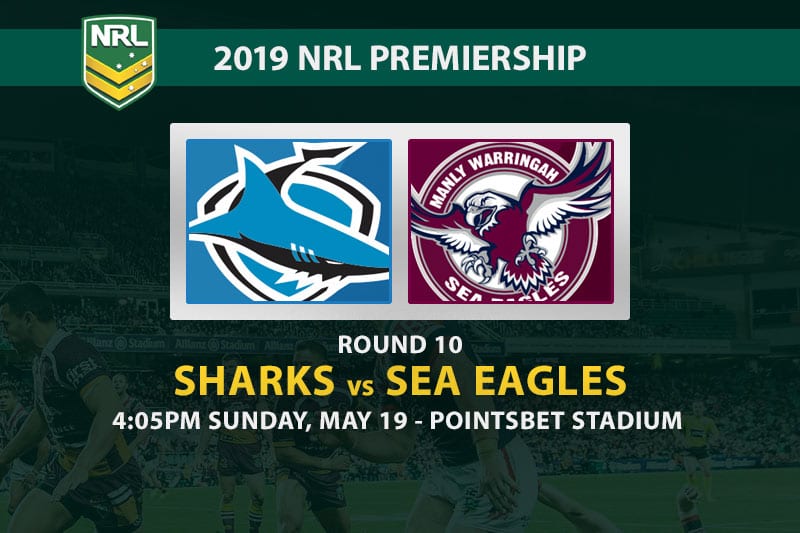 This week’s NRL action concludes with a top-eight tussle between two teams crippled by injuries.

The Cronulla Sharks are missing three NSW Origin representatives and a New Zealand international, but that did not stop them digging deep to secure a 26-18 victory over Gold Coast in the Magic Round.

The boys from the Shire have now won three of their last four games to move within two points of the top four.

There was no such joy for the Manly Sea Eagles last week as they went down 10-26 to an improving Brisbane side.

Des Hasler’s men got off to a flyer with Apisai Koroisau finding the line eight minutes in, but it was all Broncos from that point on.

The Sea Eagles remain well poised in fifth place, however, and will recoup a few big names for Sunday’s clash at PointsBet Stadium.

Head coach John Morris has made no changes to the 17 that did the job against the Titans. Fleet-footed winger Sione Katoa and second-rower Scott Sorensen are listed among the reserves. Matt Moylan was rated half a chance to return this week, but he remains on the sidelines with Andrew Fifita, Shaun Johnson and Aaron Wood for company.

Moses Suli is out with a broken finger and Toafofoa Sipley has done his knee, but Lachlan Croker, Addin Fonua-Blake, Jorge Taufua and Dylan Walker all return this week. Curtis Sironen moves from five-eighth to the forward pack and Jack Gosiewski drops to the interchange, while Abbas Miski and Kelepi Tanginoa are out of the matchday squad. Daly Cherry-Evans and Tom Trbojevic are still a few weeks away.

With Sosaia Feki struggling to find the line and Josh Dugan yet to score a try when starting at fullback this season, Morris looms as the best bet for the Sharks. He scored the first two tries against the Titans and offers plenty of value from the centres.

Taufua is a big in for the Sea Eagles, but Garrick is the one with the runs on the board in 2019. The rookie winger has already notched five tries in his debut NRL campaign, with four of those coming in the past five rounds.

Cronulla vs Manly stats and trends

This clash could come down to a question of character.

The Sharks have shown plenty this season, grinding out tough wins against the odds while never using their injuries woes as an excuse for failure.

Manly have far exceeded expectations in the early rounds, but many are now predicting they will fall back to the pack with their biggest stars out.

While the Sea Eagles have to respond after a poor display in Brisbane, Cronulla’s tough nuts and emerging guns should be good enough at home.