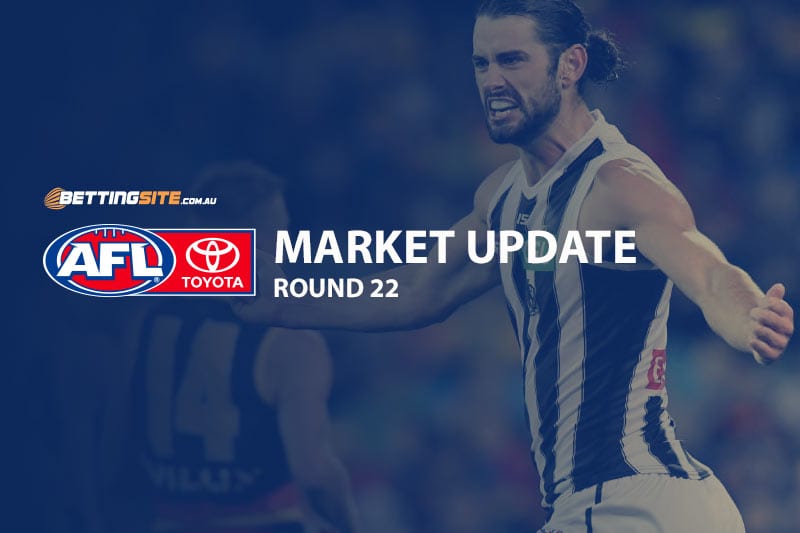 A most unpredictable round of football will take place this weekend in the AFL.

Two matches are between top-four teams, four games will directly affect the top eight and the remaining three will be very difficult to tip.

Top odds for the second-last round of the 2019 AFL Premiership season come courtesy of Sportsbet.com.au – one of Australia’s best online bookmakers.

Although this week’s Friday night game will have no impact on the finals, it will still be a tough match to tip. The Demons ($1.77) mounted a minor comeback against the Magpies last week but still lost, while the Swans ($2.05) were outplayed completely by Port Adelaide. See our Melbourne vs Sydney preview here.

If you want to see plenty of future AFL stars take to the field, this is the game for you. Both the Saints and Blues boast great young players across the field that will one day be marquee players of the competition. Blues start slightly ahead at $1.85, with the Saints not far behind on $1.95.

The first of the two top-four clashes will take place at the Gabba, where the Brisbane Lions have built a brilliant fortress. Although the Cats are still top of the AFL ladder after last week’s win over North Melbourne, they are $2.05 outsiders to the $1.76 Lions. See our Brisbane vs Geelong preview here.

Adelaide and Collingwood fans are both sweating on the outcome of Saturday’s clash at Adelaide Oval. Odds of $1.80 for the Crows and $2 for the Pies suggest there is nothing between these two as they jockey for position in the top eight.

North Melbourne has nothing to lose now that finals are out of reach, while the pressure of success could haunt Port Adelaide. Currently sitting inside the eight by percentage, the $1.80 Power need to win their next two matches, but the $2 Kangaroos could spoil those plans.

Both of these teams suffered a different type of disappointing loss last weekend. The Dockers gave away a nine-point lead with very little time left, while the Bombers were done by over 100 points on their home deck. Fremantle has shorts odds of $1.50, giving the battling Bombers $2.54 on the road.

In what could be a 2019 AFL Grand Final preview, the Tigers will host the West Coast Eagles at the MCG to start Sunday’s action. The Tigers are early favourites at $1.57, but you can never count out the $2.35 Eagles as the reigning premiers.

One of these two teams froze in the snow last week, while the other was on fire for the entire four quarters. The $2.30 Western Bulldogs claimed a whopping 104-point win over the Bombers and the $1.60 Giants posted their lowest-ever score for a match, losing to the Hawks 29-85.

The shortest odds of the round come at the last possible fixture, with Hawthorn expected winners over the not-so-bright Gold Coast Suns. The Hawks are an unbackable $1.06, leaving massive $8.50 odds to a GCS outfit that has not won since round four.

All momentum the GWS Giants built over the past month has been forgotten after they lost to the Hawks in Canberra, pushing their odds out to $15. Brisbane and Collingwood move slightly closer to the top three favourites. This week’s massive MCG clash between Richmond and West Coast will almost certainly give us a new outright leader in the 2019 AFL Premiership betting market.