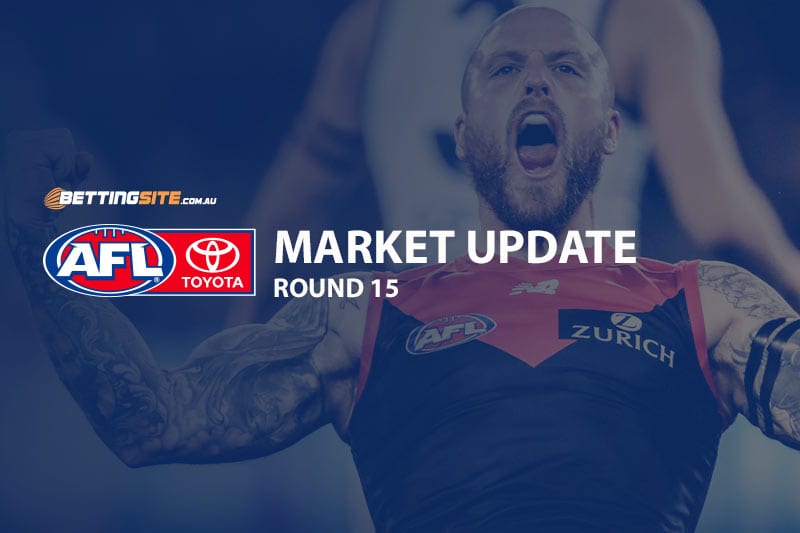 Round 14 wrapped up the remaining byes in the 2019 AFL Premiership season, leading to a full nine-match fixture for the upcoming weekend of footy.

Top odds for the round come courtesy of Sportsbet.com.au – one of Australia’s best AFL betting sites.

John Worsfold was unable to get a win over the Eagles last week and his Bombers now face the refreshed Giants. Essendon enters with $2.47 odds against the $1.50 Giants, which is great value given the home field advantage.

They may have lost last week, but the Cats are back as favourites in round 15. Priced at $1.33, they fit nicely into an AFL multi bet, whilst the Crows remain an outside chance at $3.15.

The Eagles are flying high and the Hawks are failing to take off. Hawthorn coach Alastair Clarkson has trialled players in different positions, but he still cannot find a winning formula. The reigning premiers are favourites at $1.48, with the Hawks valued at $2.60.

John Longmire’s Swans enter as unbackable favourites at $1.17 against the 17th-positioned Gold Coast Suns, who are sitting at $5 odds. However, it was the Suns who got up when these two met around this time last year.

The Magpies have been average compared to their best, whilst the Roos have overachieved since Rhyce Shaw took over as coach. The Pies have good odds at $1.37 considering they will be picked by over 80% of tipsters. North could stage an upset at $3.20.

The Power are fresh off beating the league-leading Geelong, while the Bulldogs just fell short to the second-positioned Magpies. The home field advantage gives Port $1.30 odds, whilst the Dogs sit at $3.40.

The St Kilda and Richmond clash has turned into Maddie’s Match to support the Maddie’s Vision Foundation. The Tigers are the favourites this year at $1.28, giving the Saints $3.55 odds. Richmond is expecting to get back a handful of stars from injury.

Although the Demons were able to beat the Dockers last week, they will travel to the Gabba to tackle the Lions as underdogs. Brisbane is priced at $1.50 after thrashing St Kilda last weekend, while Melbourne is paying $2.55 to salute in Queensland.

Carlton’s season does not get any easier this week when the bottom team faces Fremantle at Optus Stadium. The Dockers are priced nicely at $1.25 and the Blues are shorter than expected at $3.85, due in no small part to Freo’s injury woes with Jesse Hogan and Stephen Hill both out.

The AFL 2019 Premiership market has shifted once again following the six matches played last weekend. Due to a loss to the Power, Geelong has fallen slightly from $3.10 to $3.30. A small win for the Magpies knocked a few cents off their odds, whilst the Eagles dropped a dollar after their great win over the Bombers. Sydney’s odds remain unchanged despite a good win over the Hawks and a winnable match against the Suns this weekend – they could be a smokey with their late form.