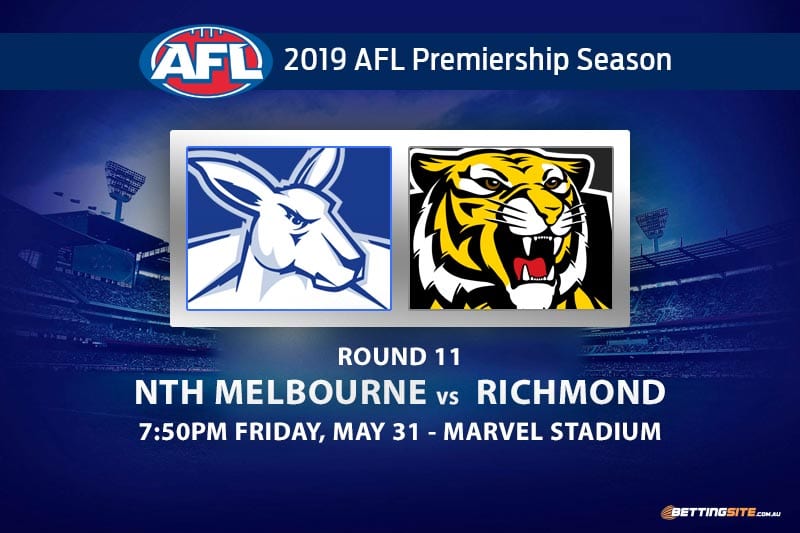 Winter has arrived and the rain will come with it, but the footy will be unaffected under the Marvel Stadium roof when the Kangaroos host the Tigers this Friday night.

North Melbourne decided it would be best if Brad Scott and the club parted ways after nearly 10 years – a big mid-season decision.

Rhyce Shaw has come in as a replacement coach until the end of the season, and he is gunning for a win in his first match at the helm.

Richmond played very good football for three quarters last week in the Dreamtime at the ‘G match, although a poor final term meant they won by a much smaller margin than what could have been.

What will happen at the selection table for North Melbourne is unknown, but it is clear that they will bring their best-available side into this match.

Both teams won last time out, but one will have to give up the points on Friday.

Ben Brown to kick three goals
With Alex Rance out of the Richmond defence, there is no better time for Ben Brown to kick a bag of goals. With great users of the footy in Shaun Higgins and Jared Polec kicking inside 50, Brown should be on the end of many scoring chains in this match.

Liam Baker to kick a goal
Round 10’s Rising Star nomination went to Liam Baker, who has kicked eight goals from his seven games and will increase his tally in this match. Baker plays small and roves the ball well, meaning the perfect conditions at Marvel Stadium will give him a chance to apply his craft.

Kangaroos vs Tigers Round 11 disposals betting

Jack Ziebell to get 25 disposals
Jack Ziebell had 35 disposals against Sydney when he played in the centre, but Brad Scott insisted on using him as a forward, clogging leading room for Nick Larkey and Ben Brown. If Ziebell is named in the midfield, you could even put him down to get 30 disposals. He is just that good.

Bachar Houli to get 25 disposals
Bachar Houli is playing his best footy since 2017 and was recognised with the Yiooken Award in last week’s Dreamtime match. Houli averages 28 disposals a match in 2019 and will not disappoint this Friday night.

Either team by less than 15 points @ $2.80 with Sportsbet
Richmond are clearly the better side, as they sit inside the top four after 11 rounds despite dozens of crucial injuries, but the Roos have the potential to spring an upset. North will change the way they play with the introduction of interim coach Rhyce Shaw, who will not go down by much in his first match in charge.

If North Melbourne can play the same way they did against the Dogs last week, they could easily keep up with the Tigers in this match. That said, the class of Richmond will prevail in the end.