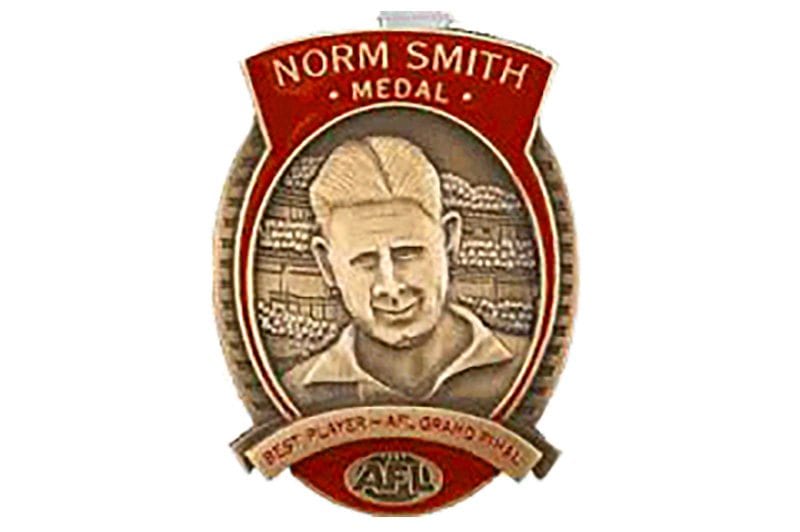 Since the year 1979, a prestigious medal has been awarded in every AFL Grand Final to the best player on the field, it awards those who stand up on the biggest stage the game has to offer.

Norm Smith is hailed as the greatest coach in history of the AFL. Smith has been recognised as the AFL Team of the Century Head Coach, winning six Premierships for the Melbourne Demons in his 15-year stint.

The medal is craved by players due to the quality of past recipients, putting the winner in the history books alongside the likes of Gary Ablett Sr., Chris Judd, Maurice Rioli, Tony Shaw, Dustin Martin and Nathan Buckley.

Given the hot form of both Collingwood and West Coast’s elite players coming into the Grand Final, we’ve got a tough field to pick from in 2018.

Before we take a look at our Norm Smith Medal tips for Saturday, don’t miss our informative betting pages:

Best on ground performances in his last three finals and an unexpected runners up finish in the Brownlow Medal count has pushed Sidebottom into favouritism. As a classy ball magnet that can push forward and kick a goal, Sidebottom is enjoying the form of his life and poses the biggest headache for the Eagles. West Coast would be smart if they decided to put Mark Hutchins on Steele this Saturday. As a tagger, Hutchins does a brilliant job negating the effect of his opponent, but Steele Sidebottom has the ability to push forward and become a dangerous forward. The famous story of Sidebottom’s 10-goal Tac Cup Grand Final performance is well known to footy fanatics — Nathan Buckley swing Sidebottom forward to impact the scoreboard?

Collingwood and West Coast battled twice so far this season and both times Jack Redden was the best player on the field. The toughness of the Collingwood midfielders doesn’t faze Redden, who just goes about his business in typical unassuming fashion. Selfless acts are noticed by the Norm Smith Medal judges, who could be swayed by Redden’s ability to bring his teammates into the game and tackle ferociously. Redden was awarded the full 10 votes in the Gary Ayres Medal for his best on ground performance against the Demons last week.

Back in 2010 when the Magpies won the Premiership, Scott Pendlebury was awarded the Norm Smith Medal. Pendlebury will be playing for his second Norm Smith Medal, a feat that has only been accomplished by three other players in the history of the AFL. Pendlebury might not be the fastest or most athletic, but he still can slow down time when he feels like doing so. If Pendlebury can get about 30 disposals, than he can win the medal, whereas most other players will need to get 35 or more to have the same impact. Pendlebury has become the most reliable player on the field for the Magpies, he is still capable of dominating football matches in the twilight of his career.

The big key forward for the Eagles has kicked huge bags of goals throughout this brilliant career. In a big Grand Final, Kennedy could be the one player that gets a hold of his opponent. Kennedy will have plenty of opportunities to kick goals and brings strong form into the game. In the Qualifying final against the same opponent three weeks ago, Kennedy had six scoring shots for only two goals. If Kennedy can kick straight for the entire match, then the Pies are going to have a very difficult day. Kennedy will win the medal if he kicks more than five goals.

These two flashy Indigenous Australians have won premierships in the past, making them two of the most experienced players on the ground this Saturday. Jetta is the only Premiership player for the Eagles, one that was very electric back in 2012 when the Swans were victorious, being named as one of the best players afield on the day. Travis Varcoe has suffered the unfortunate loss of his sister before the finals series even began, but has been one of the best performers for the Magpies since. If Varcoe can put together one more inspiring match, he could be awarded with one of the game’s highest honours, as well as his third premiership.