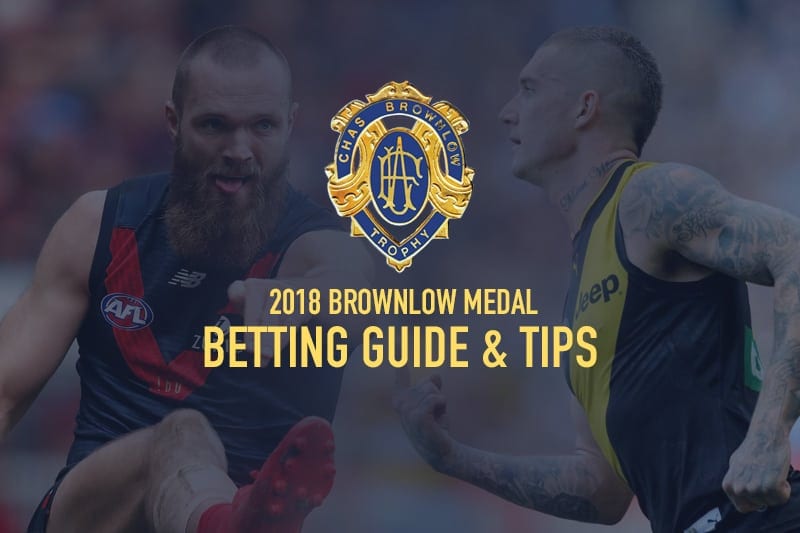 ONCE the preliminary finals are done and dusted this weekend, it’ll be the Brownlow Medal which captures the imagination of the football world and punters alike.

Monday night is when last year’s Brownlow Medal winner, Dustin Martin will present the 2018 winner with a medal of his own.

Will it be Hawthorn’s Tom Mitchell as many experts predict, or will ruckmen Max Gawn and Brodie Grundy impact the medal count?

Here are the players most likely to win for each side in the competition, and a smokey that may topple the favourites with an unexpected tally.

In this huge week of AFL betting, make sure you arm yourself with all of the best AFL betting tips, bookmakers, history and info in our comprehensive betting guides:

The small half back for the Crows has made a massive impact in all 20 of his matches this season. The young defender is an elite kick that acquires plenty of the footy off the half back flank.

Missed too many games in 2018, but was great when he played. Crouch can find he ball in the centre which is an excellent trait to have. Maybe next year for this young midfielder.

Best Chance: Dayne Beams @ $21.00 – are you eligible for betting bonuses for this bet?

After relieving himself of captaincy due to personal issues, Dayne Beams took his footy o the next level. Beams starred in all the wins for the Lions in 2018, which will boost his chances of polling votes on the night.

The magician for the Lions. Zorko can pull a trick out of a hat at any moment on the footy field, but it would be his greatest illusion if he won the Brownlow Medal.

Best Chance: Patrick Cripps @ $14.00 – which bookmaker has the best odds for Cripps?

Being one of the only good players for a team is normally a great way to poll votes, but not when you play for Carlton who only won two matches for the year. Maybe in the future when the Blues can win more matches.

This would be more incredible then the Blues improving next season. Murphy only played just over a dozen matches for the Blues and was just above average at best.

After storming home in the last three rounds of the season, Brodie Grundy has shot right into the betting. The big man could be the winner if the umpires respected the ruckman’s craft.

After finally being awarded an All Australian position, Sidebottom is officially one of the league’s best players. Steele may have to steal votes off his teammates on the night if he is to take home Charlie

The Essendon skipper enjoyed a great individual season, but his Bombers were on the receiving end of some big losses. Heppell’s long hair and thick beard may have caught the eyes of the umpires during the season, which could see him get the win.

Another young player that just didn’t play enough quality matches to be one of the favourites. Although, he did star in many occasions throughout the year, Merrett may come close to winning the Essendon team total.

Due to Nat Fyfe’s suspension, he is ineligible to win the Medal. This puts Lachie Neale right into contention for the Dockers. Neale can find the footy and had many 30 disposal matches.

The Dockers veteran was one of their best for the season and should be awarded a few votes on the night.

Coniglio is an unheralded player that keeps providing for his side. This could be a massive upset in the making if the umpires saw the amount of gut running and tough acts on the field.

The toughest man in the AFL, Callan Ward is a machine. If you take out some of the other GWS players, than Ward would dominate the medal count, but he is now captaining a team of young stars, which puts his chances into the dirt.

2016’s winner is still playing excellent football that will be acknowledged. The umpires know Dangerfield and will award him votes simply because they recognise him at every contest.

As a legend of the Geelong Football Club, Ablett enjoyed a decent first year back at the Cattery. Whether the umpires will agree with the punters is in the air, but Ablett was fantastic in many 2018 encounters.

The poor Suns are going to poll the least amount of team votes by a long way. Jarrod Lyons moved to the Suns to start anew, instead he was beaten and dropped throughout the year. Give him very little hope to even poll 15 votes.

Let’s be realistic. There’s no one else worth even a cent of your money.

As favourite to win, you carry a target on you back to every contest, but that didn’t slow down Mitchell in 2018. Played a match against the Pies where he found the footy 54 times, a long standing record that broken for most ever disposals. Mitchell should win comfortably by the second last round of the season.

The hard running wingman and midfielder will poll a few votes due to his long kicking and efficient running. Smith is a champion for the Hawks and should be awarded with votes.

Big Max Gawn is the third favourite to take home Charlie, but whether the umpires notice his finesse in the heat of the moment is unknown. Gawn won a few matches off his own boot which is always a positive for punters.

Simply because Max Gawn wins all the hit-outs, there has to be a midfielder getting all the touches, this is where Oliver comes into the equation. Oliver may over handball at times, but he is still getting plenty of the footy.

Earlier in the year Higgins’ value lowered to around $12.00 but a few injurie blew him back out again. It would be odd if he won, but he is still the best chance for the Roos.

A bull in the midfield. Cunnington did plenty of the heavy lifting when facing most opponents, that doesn’t go unnoticed from the umpires.

The classy forward for the Power is a chance to win the Brownlow. Wingard played very average football early in the year, but turned it around after the bye. Umpires lime players that kick goals.

As the ultimate utility, Westhoff will poll plenty of votes in 2018. Being seen across the entire ground will interest the umpires and they are sure to give Westhoff votes when it’s due.

Last year’s winner is a genuine chance for a consecutive season. The AFL mock Brownlow count sees Martin winning by a vote ahead of Gawn. Going by the experts it may not be Mitchell’s medal just yet.

The Richmond Captain has played great footy again this season and will get plenty of votes this season. As a previous winner, Cotchin concentrates more on winning matches than medals, but do not count him out.

After an abysmal season, the Saints could lose this star midfielder. Steven just won the St Kilda’s club Best and Fairest and rightfully so, he is a gun. Do not see him polling votes as he played for a poor side though.

Do not waste your time with Jade Gresham this season. In the future when the Saints are more competitive, then you can put some money into Jade.

Blonde hair does stand out, but so does good football. Isaac Heeney has both the locks and the talent to win the Brownlow in the future, but the Swans structure preaches team footy, so maybe another year for any Swans’ players

Jake Lloyd was one of the highest disposal accumulators in the back half of the ground across the entire competition. Lloyd will poll votes but not enough to win.

Yeo is one of those midfielders you wish was at your club. He can win the hard ball, hit kicks on the outside and most importantly, kick massive goals when your team needs them, look out for this dark horse on Monday.

The skipper for the Eagles celebrated a great season taking them far into the finals. Being the captain and organising the structure may not be as helpful as disposals when it comes to Brownlow night, but look out for him anyway.

If not for an unfortunate hamstring injury, Jack Macrae would have been a solid chance to win the Brownlow, but he is now an outside chance after playing so many brilliant matches. Next year could be Macrae’s night.

The classy left footer was not the fittest this season as he played through injury for most of the season. He is the smokey as no other Bulldogs player was that crash hot besides the Bont.