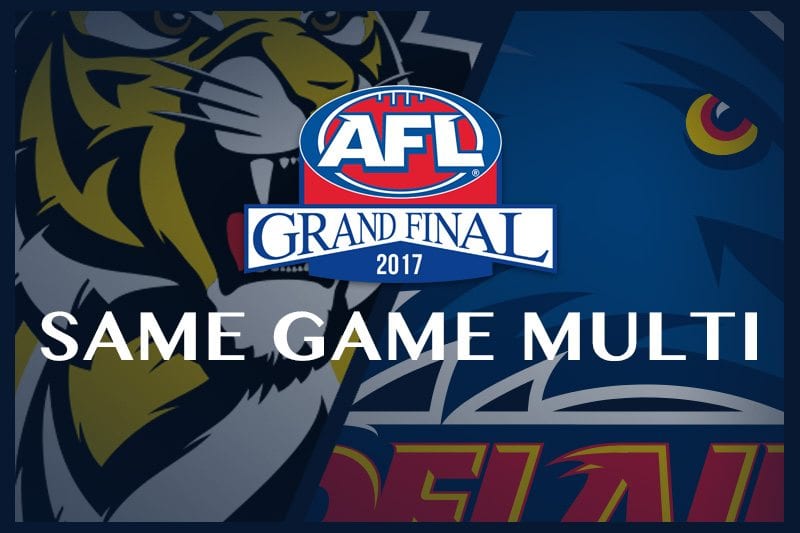 BEFORE you bet on the 2017 AFL Grand Final, you have to ask yourself one important question.

What kind of day is it going to be?

Is it going to be an Adelaide romp?

Will the Tigers continue the 2017 fairytale?

Will it be a close one? Or will one team run away with it?

Is it going to be a wet, low-scoring slog? Or will there be fireworks and goals galore?

Get these kind of questions right and there’s a big pay day in it for you.

When you’ve done your research, looked at the weather, the recent history between the sides, the recent history at the MCG and all of the surrounding factors, a Sportsbet Same Game Multi is where you can compile that knowledge to have a chance to win big.

So let’s get to work.

Don’t forget that Sportsbet.com.au has a brilliant multi special for the Grand Final – check out the details of the $50 cash back offer here:

The first thing we’ve looked at is the weather and the team defences.

Further weighted in our favour is the fact that eight of the last 12 grand finals have been under 172 points. The nerves will be high for two teams that have not been on this stage for a long time – Richmond 35 years and Adelaide 19 years – and we’re expecting things to at least start slowly.

Richmond will have the vocal support. They’ll have the positive energy that comes with a drought-breaking attempt and the Bulldogs’ inspirational 2016 premiership against the odds will give them confidence too.

But Adelaide will win.

The Crows have been absolutely clinical in their two finals thus far. The weapons in the forward line are too much for any modern-day defence. The midfield, led by the prolific Crouch brothers and Rory Sloane, has quieted the doubts on their engine room and although they don’t have a player on the list who has played in a Grand Final, this is a list that has considerable finals experience and should be hungry to finish the job after finishing on top of the ladder.

The Crows thrashed Richmond in their one match-up during the season and while we don’t think a thrashing is on the cards, we do expect Adelaide do be holding up the Cup at 5pm.

While his brother Matt Crouch is the favourite to gather the most possessions on the ground, we believe it’s Brad that will sneak under the radar to rack up possessions.

It’s the old big game theory – when there’s pressure on the big names and favourites, it’s up to the lesser lights to benefit from the lack of attention. Crouch has been in solid form and in a game that we expect to be hard-fought with plenty of stoppages, we expect his hard in and under style to suit just perfectly. We like him a lot for 30 disposals.

The Adelaide ruckman has been incredible in the Crows’ two finals, dominating around the ground and becoming a weapon up forward. His feats all the more impressive, given the loss of his brother just a week before the finals series.

Jacobs has become a strong mark and a dangerous option for the Crows, who often push him forward to create a mismatch.

Whether it be as the recipient of a free kick at a stoppage or floating forward to put those incredibly-long arms up to grab a mark, we expect Jacobs to kick a goal and clinch this multi. Eat up the $2.40 on this one.