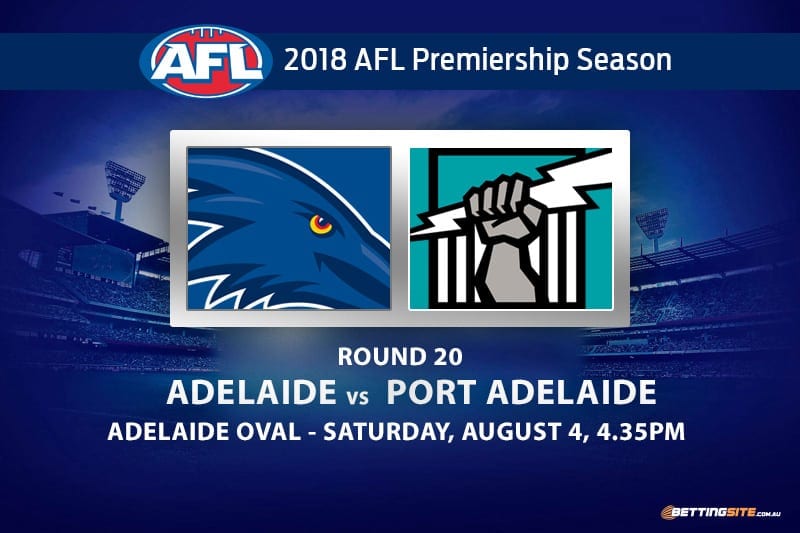 Showdown 45 will provide the Adelaide Crows with one last lifeline heading into the final weeks of the season.

Port Adelaide will be looking to beat its cross-town rivals in what is going to be a classic match — one that will shake the AFL immensely if the Crows can pull off an upset.

Many showdowns in the past have been decided in the final minutes of the match. This year’s first showdown was one of those, when Power recruit Steven Motlop kicked the sealer seconds just after Mitch McGovern thought he had kicked the winning goal for the Crows.

Port Adelaide has become a much better side since that historic victory, but so have the previously injury-riddled Crows.

The ramifications of losing this match are extremely high for both sides. The Crows will be mathematically out of the finals if they lose, completing a massive fall from their Grand Final season last year. Port Adelaide will fall outside the top four if they are unable to put away a weaker side, which will damage their premiership aspirations.

With odds nearly identical, predicting a winner becomes harder with each passing minute.

Experts in the media are claiming that Brodie Smith will make his return this week from his ACL. If this is true, the Crows will have a better chance of winning, as Brodie will provide plenty of run off the half back.

Strap yourself in for this exciting match this Saturday night between the Power and the Crows.

In a match that was played in cold and wet conditions, the Power managed to score 78-points in its win over the Bulldogs in Ballarat last week. This may have been an inflated number due to the Bulldogs’ sub-par backline, but take nothing away from the Power forwards. If this match is played in the rain, the Power will still be a good chance to put goals on the scoreboard.

The Crows are capable of scoring against lower tier teams, but unluckily for them, they will be playing the in-form Port. The Power have kept four of their last five opponents under the 60-point mark, with the Dogs only kicking five goals for the entire match last week. The Crows would need every forward on the ground to play at their best if they want to score over 75-points, which does not happen when you play good teams.

Judging off recent form, Chad Wingard has played as well as any other Port Adelaide midfielder. Chad has a fantastic ability to find the footy and run to the correct spots, which provides him with extra opportunities for more possessions. Wingard found the footy 25 times last week in the wet, which does usually not suit his style of play. This week, you can expect Wingard to follow up on his good performance in another big Showdown encounter.

Rory Sloane has struggled in season 2018, but that will not stop him from dominating in the South Australian rivalry match. Not only does Sloane’s spirit lead us to the disposal market, it also has convinced us that he can be best afield in this match, which would earn him the Showdown Medal. Valued at $12.00, Sloane is not far off the favourite in the market, but the value is still very good for the Crows skipper.

The Power are not fourth on the ladder without reason. They have proved throughout the season that winning games is easy enough for them, and holding a spot in the top four is high priority. Losing this match would be devastating for the Power, as they have far more to lose than the Crows. The Power should lead at every break and win the match.

Port to overpower the Crows in showdown 45. Take the Power at the line for extra value instead of the straight out victory.