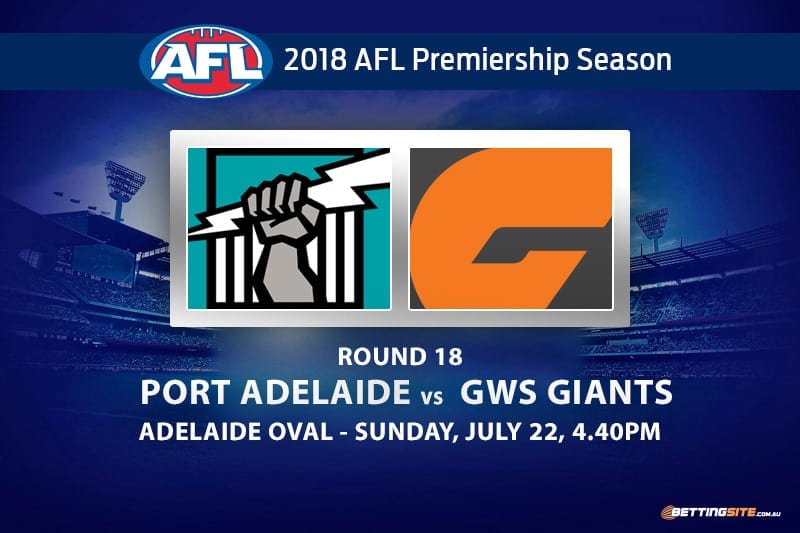 Port Adelaide and the GWS will go to war at Adelaide Oval on Sunday in one of the most important matches of round 18.

Both sides sit inside the top eight and are dark horses for the AFL premiership in another open season.

Port Adelaide went through its darkest hour last week when it was unable to defeat a depleted Fremantle outfit at Optus Stadium. The Power lost the match by nine points after injuries to both Patrick Ryder and Robbie Gray.

With the loss of Patrick Ryder, Port Adelaide finds itself in a similar position to the start of the season, when Ryder was on the sidelines. While Ryder’s absence will hurt, the Power won’t lose hope, given their success without him early in the year.

The Giants bring back two genuine stars this week as Brett Deledio and Matt Buntine are included in this week’s side.

Both are top five picks in their draft class, have exquisite skills and will bring plenty of poise to the Giants outfit.

These teams are very even when it comes to scoring as they sit adjacent to one another in the points-for category, with the Giants only ahead by a slim 18-points.

With so much at stake, this match has become another must-win for each club involved.

Here are our tips for the massive clash between the Power and the Giants.

Once Chad re-discovered his best form after a horrible start to the season, he has become one of the best midfielders in the competition. With Patrick Ryder out of the side, the centre clearances will be very difficult to win. Chad Wingard is very good at sharking hit outs from opposition ruckman, which is helpful as Dawson Simpson isn’t the most gifted tap-ruckman. If the Power stick with Chad in the guts all night, he will easily exceed 30 disposals.

Whilst being heavily tagged in the match against the Tigers, Kelly only managed the 20 touches. Kelly is known for his class, but he is also a competitive beast who hates to lose or play poorly. With this in mind we are going to be investing in him to get 30 as he will not play two consecutive underwhelming matches.

Sunny with a top of 18 degrees sounds good for a match of footy. Though this will be an afternoon match and it will cool down by the time the match is on, we still think the conditions suit a high-scoring affair. Port and the Giants are both more offensive than defensive, which does point to a high-scoring match.

As we mentioned in the last paragraph, the match will be high-scoring, which means the Giants will score overs. The Giants are beyond capable of kicking goals without the two key stars, Jeremy Cameron (suspension) and Jonathon Patton (ACL). Harry Himmelburg has been good so far, but not great in the absence of his star teammates. This is another great opportunity for Harry to showcase his talent.

Normally when both teams are scoring well the match ends with a minor margin, usually sitting under the three goal mark. For this encounter, we think the final margin will be near single figures, which definitely falls under the 15 and a half range. When both sides are desperate for victory, the match is always of high standard and close. We see that happening this round between the Power and Giants.

Simply due to the home field advantage we think the Power will be victorious on the night. The Giants will give it a red hot crack but fall short to the classy Port Adelaide forwards.