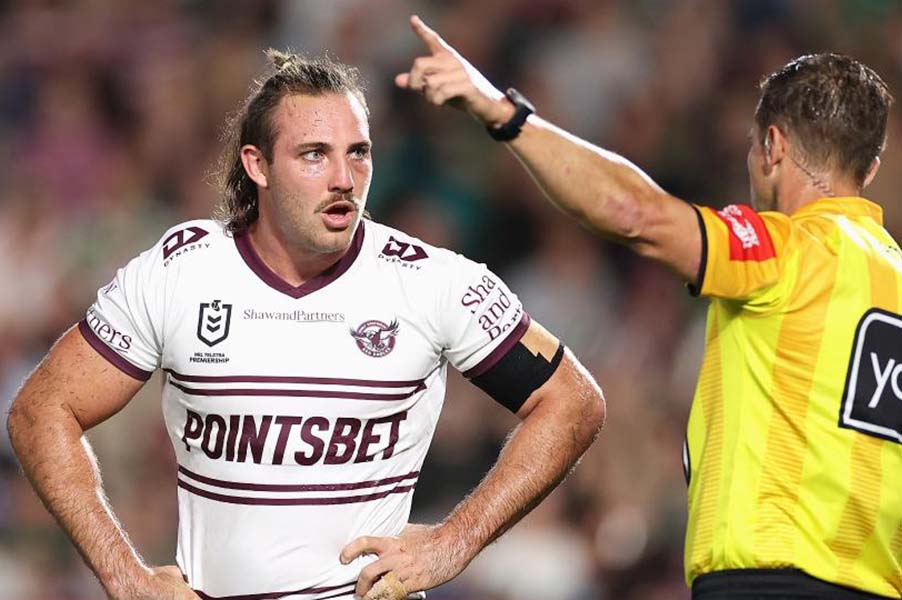 The Rugby League world has been divided over one of the uglier tackles in recent years which was seen in the South Sydney Rabbitohs v Manly Sea Eagles match at Central Coast Stadium Friday night. In the 9th minute of the game, Karl Lawton completed a tackle that put Cameron Murray in such a dangerous position, Lawton was sent from the field for the remainder of the game.

According to the NRL, a dangerous tackle is defined as “players lifting opponents into a “dangerous position” where they could injure their head or neck”.

On Channel Nine’s broadcast, legends of the game Cameron Smith and Johnathon Thurston found themselves on separate sides of the fence. Cameron Smith was asked whether he found the punishment fit for the act, to which Smith replied, “I thought 10 minutes in the bin would have been sufficient”.

Johnathon Thurston questioned Smith in his response, asking “if you think that is a sin bin offence, what is a send-off?”.

Smith would go on to question the intent Lawton had in his tackle, and its correlation to the punishment, saying the lack of intent should have seen Lawton return to the game after ten minutes on the sidelines.

Put simply, no one can definitively say whether in that moment, Lawton had the intent to drop Murray on the back of his head or not. Regardless, the act itself was well and truly deserving of a send-off. Not only was it the definition of a “dangerous tackle” in the eyes of the NRL, but there were other factors at play.

Lawton began the tackle in an almost textbook position, crouched and leading with his left shoulder. From here, Lawton would stand so quickly with both his arms wrapped around Murray and over his shoulder, Lawton’s legs would straighten, and his feet left the ground. Unfortunately for Karl, he lost all control of this tackle quickly.

The other clear issue in this tackle is equally unfortunate. As the game and tackle itself happen at great speed, Lawton tipped Murray so far beyond the horizontal position by lifting his right arm that he loses all control he has over the motion Murray’s body moves in. Pair these two issues together, and the tackle went from textbook to terrible, within a second.

NRL players do not play the game to intentionally maim their fellow professionals. Nor do they harbour any intent to complete tackles in dangerous fashions such as this. The simple fact is that Karl Lawton put Cameron Murray in a position that could have caused irreparable damage. Had damage been caused to Murray, the reaction would be far different.

The fallout from the Lawton tackle has been interesting, as the Match Review Committee had the option of charging him themselves or referring the matter straight to the NRL judiciary. However, the NRL and MRC have moved quickly on the matter, charging Lawton with a “Grade 3 Dangerous Throw”. Lawton will now have to plead guilty to the charge, which would see him spend four weeks on the sidelines, or plead not guilty and risk missing five weeks.

The NRL and officials need to be clear that tackles such as these cannot stand in our game, intentional or not. Not only will Karl Lawton have plenty of time on the sideline to reflect on that terrible tackle, but more importantly, the right call was made on the field in the interests of player safety.