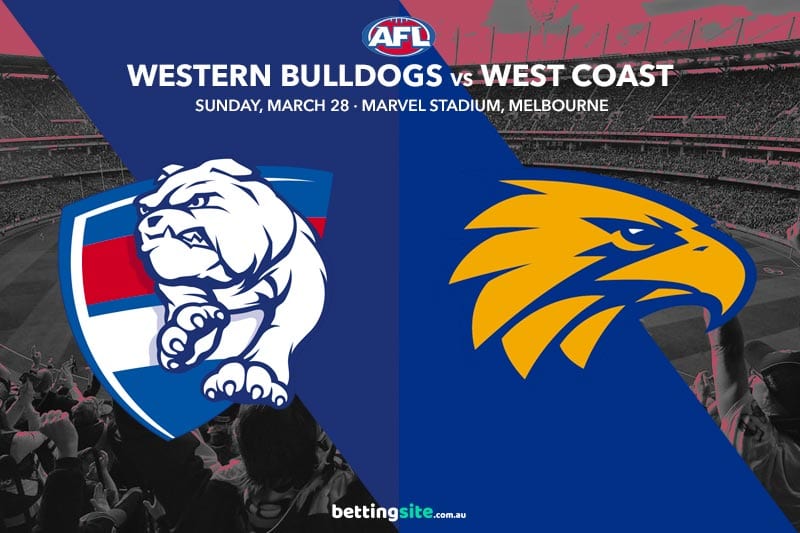 Two of the early contenders for the 2021 AFL Premiership will go head-to-head at Marvel Stadium this Sunday afternoon as the Western Bulldogs and West Coast Eagles do battle in round two.

Both sides did enough to get a victory in round one. The Bulldogs held off an ordinary Collingwood outfit, and the Eagles beat the Suns while carrying their share of injuries.

Easton Wood will make his return for the Bulldogs this week having overcome a hamstring problem, while Jason Johannisen could bring his pace into the back half.

Still without Luke Shuey and Elliot Yeo, the Eagles will rely on a group performance to outlast a powerful Bulldogs midfield that destroyed the Magpies last week.

Both Aaron Naughton and Oscar Allen came out of the WAFL in the 2017 draft, where the two Western Australians went at picks nine and 21 respectively. Now entering their fourth season in the AFL, they are now two of the most exciting key forwards in the competition. Both players kicked multiple goals in round one, and we expect them to be prominent again this week.

In our Western Bulldogs preview for round one, we highlighted their midfield potential, and they did not disappoint. Four players had over 30 disposals and another five surpassed 25, and that sort of prolific ball-winning could be a trend for the rest of the season. Back in their midfielders here since the Eagles will be without two of their best inside options in Shuey and Yeo.

One thing that points in favour of the Eagles is their track record against the Dogs. They have won five of their last six meetings, including two clashes at Marvel Stadium. Adam Simpson’s men have a vastly improved record in Victoria over the past few seasons, especially at the Docklands, where they have won their last five matches on the trot.

No player has kicked more goals in this matchup over the last four matches than Jack Darling, with 13 majors. Darling snagged a bag of six back in 2019 against the Doggies – his best haul that season. Even though he did not have an impact in last year’s clash, you can back in the tall forward to hit the scoreboard hard this Sunday.

Bailey Smith to get 30+ disposals

Even though Bailey Smith is packed into the best midfield in the competition, he still stood out last week with a massive 36-disposal display. Smith ran harder than any other player in round one and was a beast in the middle, and we can expect a similar level of output from the young midfielder under the roof at Marvel Stadium.

The Eagles should do enough to keep the margin to a minimum, but we still expect the Bulldogs to pull away with a decent victory. Jack Darling should be the best forward for West Coast, while it is hard to look past Bailey Smith in the disposal markets at leading online bookmakers.