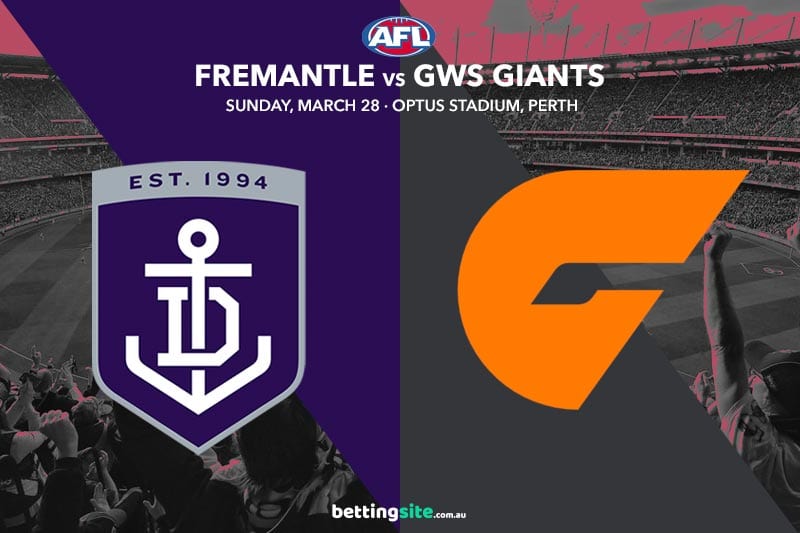 The final matchup of Round 2 has Fremantle taking on the GWS Giants on Sunday afternoon at Optus Stadium. Both teams are coming off first-round defeats to teams pushing for the AFL 2021 finals later on in the year, and both the Dockers and the Giants would have taken positives out of those losses.

The Fremantle injury list is stacked with key players. Alex Pearce and Joel Hamling were key casualties in Round 1 to go along with the likes of Michael Walters and Rory Lobb already on the sidelines, but ruckman Sean Darcy returns this week to give a much-needed boost to the Fremantle midfield.

The Giants, on the other hand, are set to welcome back small forward Brent Daniels and key forward Jake Riccardi for their trip west as they look to get on the board in season 2021.

The Dockers will be without two of the key pillars of their defence for the Round 2 clash against the Giants and will need the likes of Brennan Cox and Luke Ryan to line up against Harry Himmelberg and a combination of Jeremy Finlayson, Jake Riccardi, or Lachlan Keeffe. Himmelberg showed enough in Round 1 to suggest it may not be all doom and gloom up forward for the Giants in the post-Jeremy Cameron era. If the Giants mids can give their tall forwards elite service from the first bounce, it could be a long day for Fremantle’s key defenders.

Despite losing Pearce and Hamling, the Dockers were not too far off the pace when going down to Melbourne. They meet a Giants outfit who are a mile off the powerhouse team many expected them to be, and who struggled to capitalise on a winning position against St Kilda. Fremantle will need a big performance from their key forward Matt Taberner, who is paying $4 with Sportsbet.com.au to boot four or more goals on Sunday. As the GWS defence is known for giving opposition sides a good look at goals, that quote offers some real value for Dockers fans.

The Giants had a chance to ice the game against the Saints when Harry Himmelberg had a set shot from 30m out directly in front but hit the post in a real momentum killer. Inaccuracy has always been a struggle for the Giants, and it proved costly last weekend. They are deemed outsiders by online bookmakers, but against an undermanned Dockers outfit should be getting the job done.

All of the talk in the build up to this match will focus on how the Dockers handle the Giants talls. It could leave the GWS small forwards ready to bounce, and the returning Brent Daniels loves a snag early on. He is a key cog in the Giants machine, and his leg speed in the forward line was deeply missed last weekend. With $19 available at top AFL betting sites for Daniels to boot the first goal, we are going to be all over that come 6pm AEDT on Sunday afternoon.

To get 20 or more disposals – Nick Haynes

Remarkably, a big percentage of footy fans and pundits still don’t realise just how good Nick Haynes is. He had a below-par performance by his standards in Round 1, but we are expecting him to bounce back and be at his intercepting best against Fremantle on Sunday afternoon. Without Zac Williams, Lachie Whitfield and Heath Shaw in the backline, the Giants will need a big effort from Haynes and the crew in defence.

We expect the Giants to get the upper hand in a low-scoring match at Optus Stadium. Matt Taberner will provide a spark up forward for the Dockers, but a strong rebounding effort from Nick Haynes and the likes will get GWS home.