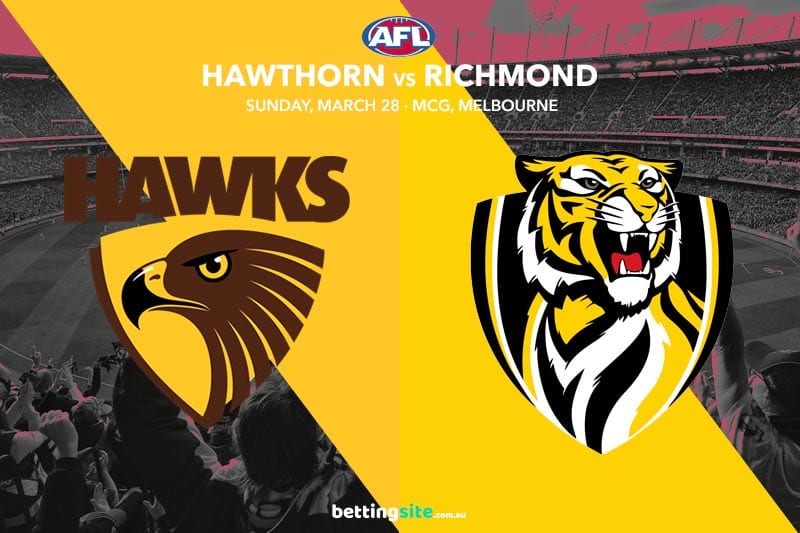 Old rivals Hawthorn and Richmond kick start a superb day of AFL footy when they clash at the MCG on Sunday afternoon.

When these two teams met early last year, the Hawks got the jump on the Tigers and the game was all but over at quarter time. Fast forward to the 2021 season, and Richmond are the benchmark of the competition yet again.

If their Round 1 win over the Blues is anything to go by, then the reigning premiers look destined for another huge season. Most pundits are tipping the Hawks to have a tough year, but their comeback win over Essendon last Saturday night will have given the fans a glimmer of hope.

Hawthorn are expected to go in with the same team on Sunday, whereas Richmond look set to lose Nick Vlastuin to a knee injury but could regain both Bachar Houli and Trent Cotchin.

These two former top hopes of the Gold Coast Suns have had vastly different experiences so far in their careers. Jaeger O’Meara is finally getting a decent crack at top-level footy and has put his injury issues behind him, while Dion Prestia is a three-time premiership player for Richmond. These two look set to go head-to-head on Sunday afternoon and will be looking to give their A-graders in Tom Mitchell and Dustin Martin a chop out. AFL betting odds of $2.20 are available for Jaeger to gather 30 disposals or more as he did last week, which seems a bit skinny. The value looks to come from Prestia with $3.20 on offer for him to gather 30 touches on what promises to be a perfect day for footy.

The way Hawthorn finished over the top of Essendon in the second half in Round 1 when coming back from 40 points down shows they have plenty of ticker. However, coming up the best team in the competition at their favourite ground is a much tougher task. The line of +30.5 with online bookmakers seems appropriate; Richmond were good but not great in Round 1, yet they still have enough credits in the bank to suggest they will beat the Hawks. Hawthorn will give Richmond a fright at one stage or another, and the five-goal head start looks a smart play.

If the Tigers bring their best footy against Hawthorn, they can account for them in second gear. But, as always, it is early in the season and any game can throw up an unpredictable result. Richmond needed a Dustin Martin masterclass to get past the Blues in Round 1, so we are expecting a true four-quarter performance from the premiers this weekend.

With the new rules favouring fast-paced footy, we could headed for a return to the days of key forwards kicking bags. We are backing Jack Riewoldt to continue his strong showing in Round 1 with another three (or more) goals against the Hawks. The Hawthorn defence struggled to contain the Essendon debutant Harry Jones last week; if the youngster had kicked straight, he would have had a very fruitful night. Riewoldt is coming off four goals on opening night and should be able to deliver something similar on Sunday afternoon.

Richmond to win by 1-24 points

Richmond have tended to do their best work from July onwards in recent years. They come up against a Hawthorn side who showed plenty of heart in Round 1, so it looks set to be a close game throughout the first three quarters. We expect Richmond to kick away a touch in the last quarter and record another win that looks somewhat comfortable on paper.

Expect big-time players Jack Riewoldt and Dion Prestia to prove the difference yet again as Richmond go 2-0 and get revenge from their Round 3 loss to the Hawks last year.