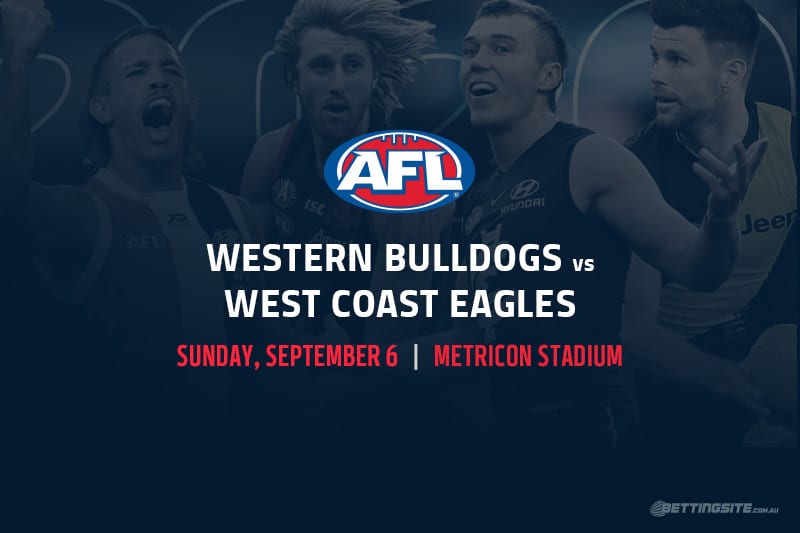 There are no more second chances for the Western Bulldogs, who must defeat the West Coast Eagles at Metricon Stadium this Sunday to keep their finals hopes alive.

The Doggies are looking to end a five-game losing streak, while Adam Simpson and the Eagles have top-four aspirations on their minds.

Luke Beveridge’s men come in fresh off the bye, but they will need to make a few personnel changes for Sunday’s clash on the Gold Coast.

Easton Wood and Laitham Vandermeer both suffered hamstring injuries in the loss to the Cats, while Zaine Cordy and Taylor Duryea are firming for selection after solid scratch matches.

Josh Kennedy is cleared of his round 14 concussion and will make a return this week, giving the Eagles another tall option up forward against the somewhat undersized Bulldog defence.

Luke Shuey suffered another hamstring setback in West Coast’s win over Essendon, meaning the 2018 Norm Smith Medal winner could be out until the finals.

With Shuey and Elliot Yeo out for the Eagles, the other midfielders must stand up. While Tim Kelly is the obvious option in the middle, we like Andrew Gaff on the wing. Gaff has amassed over 35 touches in four of his last five matches against the Bulldogs, including a massive 42-disposal effort in 2017. Gaff has collected over 30 disposals in two of his last three games and should own the wing for the Eagles this Sunday.

Very few key forwards this season have been as consistent as Jack Darling, who has kicked multiple goals in eight of his last nine matches. The Bulldogs haven’t been able to stop Darling in the past three seasons, as the big man has kicked three, four, three and six goals against them. With Kennedy returning and copping the best defender, Darling might get off the leash again this weekend.

While the Bulldogs must win to keep their season alive, the Eagles will be too strong going forward. Kennedy, Darling and Liam Ryan should all dominate the aerial battle while Wood is out injured. Even without Shuey and Yeo at his feet, Nic Naitanui should beat Tim English in the ruck and give the Eagles a massive advantage in the middle.