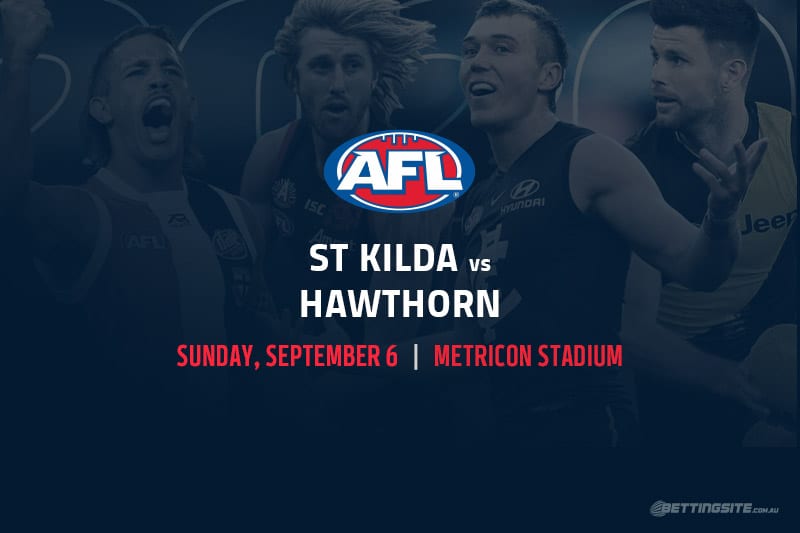 Seventh-placed St Kilda will be looking for a strong all-round performance when they face 16th-placed Hawthorn on Sunday afternoon at Metricon Stadium.

The Saints are coming off the bye and would have taken benefit from the eight-day break after two nail-biting finishes against Brisbane and Melbourne respectively.

Both those games ended in losses for Brett Ratten’s men, meaning they need to win every game in the run home to guarantee a place in the finals.

Meanwhile, Hawthorn are a basket case at the moment, and their lack of a sustainable gameplan was made shockingly apparent on Tuesday night when they became the first team to lose to Adelaide this year.

Form alone says this should be an easy kill for the Saints, but 2020 has thrown up plenty of surprises already.

On paper, the Saints look to have Hawthorn matched across the board. If they can capitalise on their almost-certain ruck dominance, St Kilda could put a space between them and the Hawks quite quickly. If the likes of Jack Steele, Seb Ross, Brad Hill and Zak Jones can get their hands on the ball early and provide the Saints forwards with better entries than they have in recent games, this could be one-way traffic.

St Kilda’s high-priced recruit has failed to set the world on fire, but before the break he had a season-high 27 touches against Brisbane and almost dragged his new club over the line against Melbourne. Facing one of his former sides, Hill will know exactly what he is coming up against. The Hawks don’t exactly have the outside runner who can go all day with a player like Hill, so this seems a good play at a decent price.

The Saints have a genuine superstar in the making in Max King. It’s only his second year, but the big forward keeps finding ways to make an impact. Sure, the end product needs a bit of work, but the signs are there. King was well beaten by an on-song Steven May last weekend, but expect him to bounce back here against the undermanned Hawks.