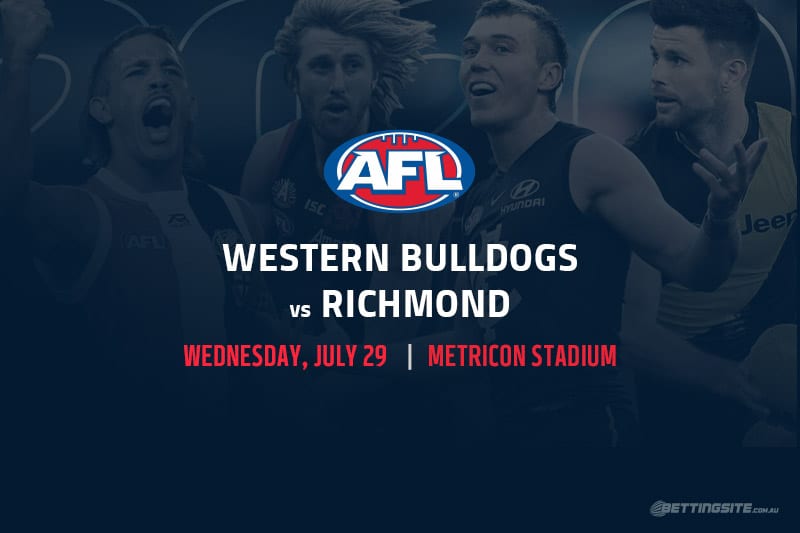 The AFL’s 19-day footy bonanza kicks off this Wednesday night with a bumper clash between the Western Bulldogs and Richmond at Metricon Stadium.

Injuries are starting to become an issue for the Dogs, who lost debutante Callum Porter to a busted AC joint in last week’s thrilling win over the Gold Coast Suns.

They also had both Tory Dickson (quad) and Josh Schache (concussion) go down in a scratch match, leaving them light on forward options with Aaron Naughton still working back from an ankle problem.

Bailey Dale, Josh Dunkley and Lin Jong are also out with ankle injuries, while Lachie Hunter is away on indefinite personal leave having only just returned from a lengthy suspension.

Some will say that raft of absentees squares the ledger for the Doggies’ date with a Richmond Tigers side who are missing a host of premiership players for various reasons.

The Tigers had hoped to have David Astbury back in the mix by now, but the star defender is set to miss another few rounds after suffering a setback in his recovery from a knee injury.

In better news for the yellow and black, club captain Trent Cotchin is expected to return this week after missing three games with a hamstring injury.

Wayward finishing cost Richmond in their loss to the GWS Giants last time out, so perhaps some shooting boots would be another wise inclusion for round nine.

It has taken a while for Hayden Crozier to find his feet at AFL level, but he is now a fixture in the Bulldogs’ back six. The former Docker was close to best on ground against the Suns with 19 disposals, seven marks and four inside 50s. Crozier has only dropped below 15 touches in one of his seven starts this season, so load up on the $1.40 and watch the money roll in.

Shai Bolton’s output around the ground has lifted considerably since Richmond went north a few weeks ago. The zippy half-forward recorded 19 disposals against both North Melbourne and GWS, racking up an impressive 13 inside 50s across those two games. With the Tigers missing five of their top seven ball-winners, we are speculating on Bolton to nudge 20 this week at $2.

Injuries in the midfield and the forward line mean Marcus Bontempelli is carrying a heavy load this season. He hasn’t kicked a goal since round six, but we think the skipper will need to hit the scoreboard this week if his Bulldogs are to get over the line against Richmond. The $1.83 is decent value for a player who regularly kicks more than 20 goals a season.

Jake Aarts has looked lively since making his debut in round five, but some nervy finishing has let him down. The mature-aged rookie has peppered the goals early in the past few weeks, which makes him an interesting option at $19 in the first goalscorer market. If Aarts doesn’t keep his place this week, Jason Castagna ($12) or even Jack Higgins ($34) might be worth a look.

The forecast for Wednesday night suggests ideal conditions for footy, but we haven’t seen many clean, high-scoring games under the lights this season. Also, neither side’s key forwards are firing; Josh Bruce has kicked one goal in the past three weeks, while Tom Lynch and Jack Riewoldt aren’t faring much better. Go the unders.

The Doggies have had their ups and downs this year, but they come into this with five wins from their past six games. They are also 5-1 from their last six meetings with Richmond. Scoring remains an issue for the Tigers, and it is hard to see them winning this unless their star forwards turn up out of the blue. Get on the Dogs.