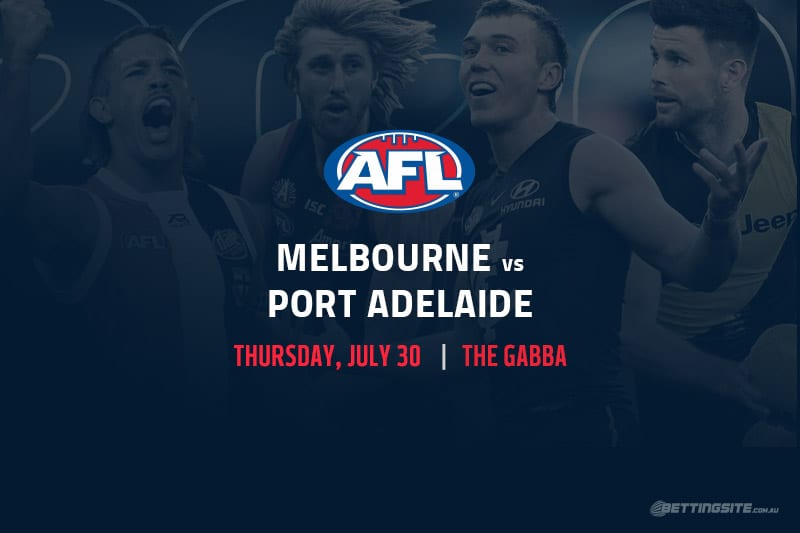 Both Melbourne and Port Adelaide will look to get back to winning ways when they meet at the Gabba this Thursday in round nine of the AFL 2020 season.

The Demons showed plenty in their four-point loss to the Brisbane Lions and could have won it with a bit more composure in front of goal.

Their form is much stronger than their 13th placing on the AFL ladder suggests, while an unusually short injury list means they bring just about their best 22 into this clash.

The Power were outgunned by an impressive St Kilda side last weekend, but superior percentage ensures they retain top spot despite sharing a 6-2 record with the Lions.

Port lose Todd Marshall for the next six weeks with a broken thumb and Steven Motlop for a month with an ankle injury, while Riley Bonner must undergo a fitness test after hurting his hip against the Saints.

Scott Lycett could be available after two games out with a knee issue, which would give Port the option to field two specialist rucks against the imperious Max Gawn.

The Power will also have to come up with a plan to stop the powerful Melbourne midfield as they look to make it three in a row against the Dees.

The Demons are blessed with gifted on-ballers, but Christian Petracca is undoubtedly the pick of the bunch right now. The explosive playmaker has gathered 24 disposals or more in five of his seven games this season, so the $1.72 for 25+ touches looks a decent investment. Also noted his $11 quote in the Brownlow Medal betting, because that is bound to shorten.

While Travis Boak has not passed 20 touches in any of his past three games, he copped hard tags from Matt de Boer, Ed Curnow and Jack Steele in succession. Boak has clocked 25 disposals in all three of his starts in Queensland this year, so there is some sense in backing him to hit that mark against a Melbourne side who like to back their own talent rather than shut down the opposition.

Once a promising midfielder at Essendon, Jake Melksham has developed into an absolute nuisance for opposition defenders since moving to the Dees in 2016. The 28-year-old from Glenroy doesn’t need many opportunities to make an impact, as he showed when booting three goals against Brisbane. One of those was Melbourne’s first of the game, so we know he is a threat early.

Charlie Dixon’s form has cooled a little in recent weeks, but there is no denying the threat he poses inside 50 for the Power. If Ken Hinkley opts to play the two rucks, his star forward might find a little more space than he did against the Saints last time out. The Melbourne defence is still settling to a degree, so Dixon may see this as an opportunity to cash in.

These two sides have gone under the total points line in each of their past five meetings, and we think that trend will hold this week. Both midfields feature some tough customers who won’t take a backward step, so we can expect a dogfight in the guts with very little clean ball coming out of the stoppages.

While Port Adelaide’s loss to St Kilda has raised questions about their form against the better sides, Melbourne’s three wins have come against Carlton, Gold Coast and Hawthorn – hardly premiership contenders. The Power are one of the few teams to have tamed Max Gawn in recent years and haven’t lost a game at Metricon Stadium in nine visits, so that’s where our money is.